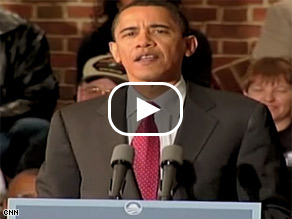 WASHINGTON, Pennsylvania (CNN) –- For the first time since a mini dust-up back in October, Democrat Barack Obama wore an American flag pin Tuesday at a town hall meeting with veterans in Pennsylvania.

But he didn't show up wearing the pin–instead, a Vietnam era veteran presented it to him on the ropeline as Obama made his way to the podium at the start of the event.

He then did just that.

"I appreciate your service," Obama told Philip Fiumara, Jr., a Vietnam era veteran and undecided voter, according to the campaign.

"Thank you so much. It means a lot coming from you, and we are grateful to you."

This is the first time Obama has worn a flag pin on his lapel since it was widely reported last fall that he had stopped wearing one.

At the time, Obama said, "My attitude is that I'm less concerned with what you're wearing on you lapel than what's in your heart. You show your patriotism by how you treat your fellow Americans, especially those ones who serve."