Romney steps out for McCain on economic issues 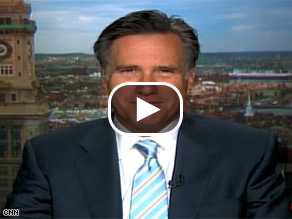 (CNN) – As John McCain shifted focus to his economic policies with a major address Tuesday, former Republican presidential hopeful Mitt Romney plugged the Arizona senator’s credentials on fiscal issues, telling CNN that “if you take Hillary Clinton’s and Barack Obama’s experience and multiply it by ten, you still haven’t caught up with Sen. McCain when it comes to experience on the economy.”

McCain, who has focused his campaign on his national security and foreign policy credentials, has faced charges that he is relatively inexperienced dealing with economic policy.

“For a person who’s spent over 25 years in Washington, D.C., working on economic policies, from the days of Reagan and throughout the current time, Sen. McCain is very well aware of the spending programs in Washington,” Romney told Kiran Chetry. “Which ones need to be cut back, which ones need to be grown. He understands also how to relieve the pressure on the American taxpayer.”

Romney’s own fiscal expertise was a foundation of his own White House bid. He has been named as a possible running mate for McCain, but has refused to speculate on his vice presidential chances . “I’m working real hard to get Sen. McCain elected. He’s got a number of people that he can choose from,” Romney told Chetry Tuesday.