Clinton, Obama face off in Pennsylvania

(CNN) - Neither Sens. Hillary Rodham Clinton and Barack Obama would commit Wednesday when asked in a debate if they would take the other as their running mate should they win the nomination.

Both candidates responded to the first question of the debate with smiles, prompting laughter from the audience. After a moment, Obama said he was happy to respond.

"I think it's premature at this point for us to talk about who vice presidential candidates will be, because we're still trying to determine who the nominee will be." he said.

Clinton echoed those comments. "I'm going to do everything I possibly can to make sure that one of us takes the oath of office next January," she said. "I think that has to be the overriding goal, whatever we have to do."

Each candidate said they thought the other was capable of winning the presidency. 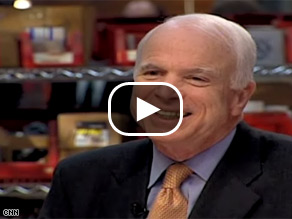 “Americans need some relief,” McCain said of his proposal to temporarily suspend the federal tax on gasoline and diesel fuel. “I just think it’s kind of a good thing to do so people can have a little more enjoyable summer during tough times,” he added.

McCain, long an advocate of cutting wasteful federal spending, also explained why he was pushing certain measures that would likely delay achieving a balanced federal budget if he wins the White House. “The best way to have a balanced budget is to have a recovering economy,” said McCain.

[cnn-photo-caption image= http://i.cdn.turner.com/cnn/2008/images/04/16/art.clinton.obama.jpg caption="Obama expands lead nationally according the the latest CNN poll of polls."]
(CNN) - Barack Obama has extended his lead in national polls over Hillary Clinton, despite several days of negative coverage over his controversial comments about some small-town Americans.

According to a new CNN analysis of several recent polls, the Illinois senator now holds a 9-point lead over Clinton, 50 percent to 41 percent. That compares to the 3-point margin Obama held over Clinton at the end of March.

The so-called "poll of polls" includes surveys conducted between April 7-15 - meaning four of the days were those that immediately followed the initial reports of Obama's now-famous comments.

The polls included in the analysis were those conducted by Gallup, ABC/Washington Post, Reuters/Zogby, and AP/Ipsos.

According to the campaign, the Obama's brought in a total income of $4,238,165, the vast majority of which came from sales of the White House hopeful's bestselling book.

More details provided by the campaign:

(CNN) - The Democratic Congressional Campaign Committee is accusing the House Republicans’ campaign committee of illegally coordinating advertising with an outside group in a competitive Louisiana special election.

The DCCC, which works to elect House Democrats, filed a complaint with the Federal Election Commission Wednesday arguing there’s evidence The National Republican Congressional Committee was involved in a TV script for an ad by the conservative group Freedom' s Watch. According to campaign finance laws, it is illegal for party committees to coordinate with outside groups within 90 days of a federal election.

The ad says that Democratic candidate Don Cazayoux will raise taxes if elected. Democrats say the document for the ad script sent to Louisiana television stations includes a stamp, referred to as "metadata," that shows “NRCC.”

Democrats argue that Freedom's Watch launched the TV ad right after the NRCC finished a week-long run of an ad with similar images of Cazayoux.

END_OF_DOCUMENT_TOKEN_TO_BE_REPLACED 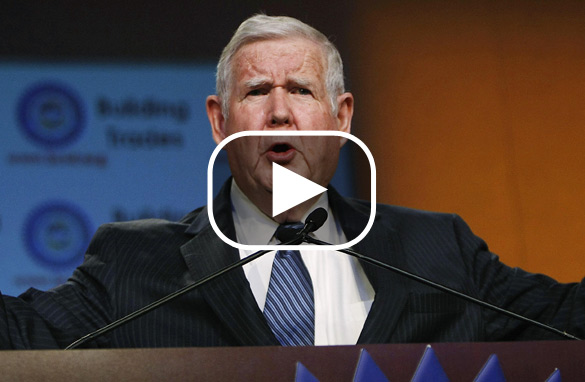 END_OF_DOCUMENT_TOKEN_TO_BE_REPLACED

Blitzer: Bush, the pope - and politics?

[cnn-photo-caption image= http://i.cdn.turner.com/cnn/2008/images/04/16/art.bush.pope.jpg caption="Pope Benedict XVI and President Bush greet thousands of guests on the South Lawn Wednesday."]
(CNN) - It was a beautiful arrival ceremony on the South Lawn of the White House. As a former White House correspondent, I covered many such ceremonies over the years. But no matter how many times you see and hear these events, it’s always exciting and spectacular. This one for Pope Benedict XVI, I must say, was even more extraordinary because so many thousands of guests were on hand, and they were genuinely moved.

President Bush delivered a carefully-written address touching several sensitive issues. But I was especially struck by these words: “The United States is the most innovative, creative and dynamic country on earth. It is also among the most religious.”

I may be reading way too much into those words, but I was struck by the contrast to Democratic presidential candidate Barack Obama’s controversial words about those people in small towns in Pennsylvania who’ve lost their jobs. “And it’s not surprising then they get bitter,” Obama said, “They cling to guns or religion or antipathy to people who aren’t like them or anti-immigrant sentiment or anti-trade sentiment as a way to explain their frustrations.”

Was President Bush deliberating taking a veiled swipe at Obama? As I said, I don’t know, but it was curious – at least to me.

What I do know is that the Pope’s words very uplifting, especially when he blessed the United States with his “fervent prayers that Almighty God will confirm this nation and this people in the ways of justice, prosperity and peace.”

Bill Clinton says older voters are supporting his wife because they're too smart to be fooled by Barack Obama's rhetoric.

The Boston Globe reports the former president also took issue with Obama's statement that many of the problems the U.S. faces were around long before President Bush took office.

Clinton told voters in Pennsylvania: "I think there is a big reason there's an age difference in a lot of these polls. Because once you've reached a certain age, you won't sit there and listen to somebody tell you there's really no difference between what happened in the Bush years and the Clinton years; that there's not much difference in how small-town Pennsylvania fared when I was president, and in this decade."

See, it's really not about Hillary… it's about Bill's legacy.

Behind the Scenes: Watch for political fallout from pope's visit

NEW YORK (CNN) - The official motto of Pope Benedict XVI's April 15-20 visit to the United States, the first of his papacy, is "Christ our Hope." Based on the frequency with which papal spokespersons have struck a different note, however, its unofficial motto might well be, "This is not a political event."

Here's a typical example from early April: "The pope is not coming to get mixed up in the local political process," said Italian Archbishop Pietro Sambi, the pope's ambassador to America, in an interview with the National Catholic Reporter. "His presence is about something more universal and, at the same time, more personal."

Fear that Benedict's visit might be read through the lens of party politics reflects a key fact of electoral life in America: The "Catholic vote" matters. To take the most obvious example, if a few heavily Catholic counties in Ohio had gone the other way in 2004, pundits would today be handicapping the re-election of President John Kerry.

“At the moment, critics have tried to diminish Senator Obama through the exaggeration of certain of his comments and relationships,” said the New Jersey native, in a statement posted on his Web site Wednesday. “While these matters are worthy of some discussion, they have been ripped out of the context and fabric of the man's life and vision… Over here on E Street, we're proud to support Obama for President.”

In February, Springsteen had resisted making a choice between Obama and Hillary Clinton, telling USA Today that "there are two really good Democratic candidates for president. I admire and respect them both enough to wait and see what happens."

But he praised Obama, who cited Springsteen as the person he would most like to meet in an interview with People magazine.

"I always look at my work as trying to measure the distance between American promise and American reality," he told the paper. "And I think (Obama's) inspired a lot of people with that idea: How do you make that distance shorter? …”