Watt served as campaign manager for the Democrat’s unsuccessful run against the-Sen. Jesse Helms in 1990. He told reporters on a conference call Wednesday that Gantt almost came out on top that year.

"This campaign has some of those same racial dynamics, those same kind of interesting dynamics that don't coincide with every single campaign that we've had," he said.

He added that "to stick our head in the sand and not acknowledge that would be to ignore the obvious." Earlier, Watt had said that he did not think the country was ready for a black president.

He said that he has been surprised at how much Obama has continued to build support as the campaign has progressed, one reason why he changed his mind after earlier stating that he did not think America was ready for a black president.

The congressman said he believed the racial climate had improved since the Gantt-Helms race: “it’s a new day in America,” he said.

Hillary Clinton has the backing of superdelegate Susan Burgess, a Charlotte city councilwoman.

Clinton: McCain is 'digging us a hole to China'

“Yesterday, he made it clear that when it comes to the economy he looks at the hole President Bush has dug us into and says, ‘Why not more? Let’s go deeper,’” Clinton said in remarks to the Building and Trades National Legislative Conference in Washington.

She said she remembered her brothers pretending to dig a hole to China in their family backyard.

“Little did I believe, all these years later, that we would have the Republican Party and president and a Republican nominee who are literally digging us a hole to China,” she said.

Clinton said McCain “has very little understanding of how we are going to get our selves out of that hole” and issued a familiar attack against his economic credentials.

“I know that many people will be very impressed and admiring of Sen. McCain’s record of service,” she said, “but he’s admitted he doesn’t understand the economy. He has proved that in this campaign.”

END_OF_DOCUMENT_TOKEN_TO_BE_REPLACED

(CNN) - On an Obama conference call Wednesday, campaign manager David Plouffe would not say whether or when the Illinois senator would be releasing his 1997-99 tax returns.

"We released our full tax returns for the entire decade, same period,” said Plouffe, adding that they would “shortly” be releasing the full 2007 returns.

But Plouffe was referring to the years 2000 through 2006, the “same period” as the returns released by Hillary Clinton’s campaign recently, after Obama did the same. The New York senator’s tax returns for the past 30 years have now been made public.

“Despite touting its commitment to transparency, the Obama campaign is apparently refusing to release Sen. Obama’s tax returns from 1997, 1998 and 1999,” the Clinton campaign said in a statement sent to reporters Wednesday afternoon. “It’s unfortunate that Sen. Obama isn’t living up to the standards he sets for everyone else.”

[cnn-photo-caption image= http://i.l.cnn.net/cnn/2008/images/01/01/art.liebermainmccain.gi.jpg caption=" Sen Lieberman has traveled with McCain on the campaign trail."]
(CNN) - Sen. Joe Lieberman - the Democratic vice presidential nominee in 2000 - is willing to address the Republican National Convention if it will help Sen. John McCain win in November, his office confirms to CNN.

In an interview published Tuesday night, the independent Connecticut senator told The Hill newspaper that “If Sen. McCain, who I support so strongly, asked me to do it, if he thinks it will help him, I will.”

Lieberman, who lost his Democratic superdelegate status when he was re-elected to the Senate as an independent, endorsed the Arizona senator earlier this year and has actively campaigned for the presumptive GOP nominee.

McCain has not yet asked Lieberman if he would address the Republican nominating convention in September.

Obama and Clinton: battle of the ads

[cnn-photo-caption image= http://i.cdn.turner.com/cnn/2008/images/04/16/art.obama.dime.jpg caption="Barack Obama's campaign released a new ad Wednesday in response to Clinton."]
(CNN)— Barack Obama’s campaign launched a new ad in response to yesterday’s ad from Hillary Clinton that charged he was unduly influenced by donations from energy executives with a new spot that again accused her of accepting more special interest money than any other candidate.

“Obama’s the only candidate who doesn’t take a dime from oil company PACs or lobbyists,” says the narrator in the 30-second spot. “What’s Hillary Clinton’s answer? The same old politics… The truth? It’s Barack Obama who’s taken on the oil companies.”

The ad titled, "Dime" is set to air in Pennsylvania.

(CNN) - Two of the Democratic Party’s former presidential nominees have endorsed the idea of a superdelegate convention in June to end the bitter nominating fight.

Mike Dukakis, the 1988 nominee, and George McGovern, who topped the ticket in 1972, told the Boston Globe they believe superdelegates should state their choice publicly soon after the primary season ends. The idea was first proposed by Tennessee Gov. Phil Bredesen.

Neither Hillary Clinton nor Barack Obama can reach the required 2,025 delegates without the support of the party's superdelegates.

"We don't want an acrimonious battle all the way to the convention and maybe out onto the convention floor," said McGovern, who has endorsed Clinton. "We had that in 1972, when I was nominated, and it was very damaging."

He added that if he had had more time to consider his choice of a running mate, he might have avoided difficulties with his first selection, Sen. Thomas Eagleton, that further damaged his bid. 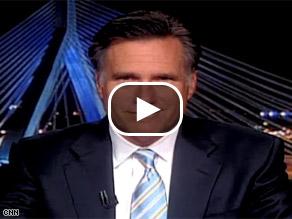 (CNN) – Former presidential candidate Mitt Romney is downplaying his prospects for the vice presidential spot on the Republican ticket even as he continues to act as an important surrogate for his party’s presumptive nominee on the economy, a key issue in the presidential campaign.

“I think it’s very unlikely that I will be John McCain’s running mate,” the former Massachusetts governor told CNN’s Campbell Brown Tuesday night. “There’s so many good folks that are out there, and the other folks haven’t been rivals in the presidential sweepstakes.”

Romney and McCain had a history of frosty relations before the former governor ended his presidential bid.

Romney weighed in on the controversy over Sen. Barack Obama’s comments about rural Americans. “He showed a disdain for people who have values that are different than his own,” he told CNN, echoing similar comments by McCain Tuesday.

Romney also told Brown that he was “glad” the Democratic nomination race had lasted so long, “so that we get the chance to know Barack Obama better.”

“We’ve known Hillary Clinton for some tim,e but Barack Obama’s been kind of an unknown commodity and now we’re getting a better sense of who the man is,” said Romney. 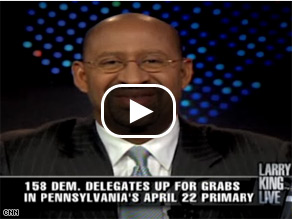 “It’s interesting to hear people from outside Pennsylvania talk about us, you know, as if we’re sitting around, pouting all day long,” Nutter told Larry King. “If you come to Philly, if you come to our suburbs and other places, you'll see people who are excited about this election.”

Following the outcome of the Texas, Ohio, Rhode Island and Vermont primaries last month, Pennsylvania became the next critical state to win with 158 delegates at stake, bringing with it enormous media attention.

Nutter, who has endorsed Sen. Hillary Clinton’s candidacy, took a shot at Obama when explaining what voters in his state are interested in.

“They want to hear from a candidate who has something to say about real issues that matter to people on a daily basis,” Nutter said, and “not be characterized in certain ways that don't make any sense.”

END_OF_DOCUMENT_TOKEN_TO_BE_REPLACED

[cnn-photo-caption image= http://i.cdn.turner.com/cnn/2008/images/04/04/art.candid.gi.jpg caption=" The race appears to be narrowing in Pennsylvania."]
(CNN)- It is still unclear how much, if any damage was done to Sen. Barack Obama's presidential run as a result of his 'bitter' comments last week, but a CNN poll of poll released Wednesday suggests the affects in Pennsylvania appear to be minimal.

The latest CNN poll of polls - which combines the results of four surveys taken between April 8 and April 14 - shows Hillary Clinton leading Barack Obama in Pennsylvania by 5 points with 47 percent to his 42 percent.

Because a some of the surveys were conducted before Obama's comments on some rural voters were reported, the average does not fully account for any potential fallout.