Both Obama, Clinton to appear on Thursday's 'Colbert'

Obama will participated in the interview with Colbert via satellite after his event in Greenville, North Carolina.

House Judiciary Committee leaders said it is "imperative" that Rove answer allegations that he pressed the Justice Department to investigate Siegelman, a Democrat who when indicted was preparing a rematch against Alabama's Republican governor in 2006.

"We look forward to scheduling an early date for your voluntary appearance," the committee's Democratic leaders wrote in a letter released Thursday.

Rove's lawyer, Robert Luskin, said Thursday that President Bush's onetime political mastermind "absolutely denies he was in any way involved in the decision to prosecute Don Siegelman." Luskin said he has had no direct communication the the Judiciary Committee's staff or its chairman, Rep. John Conyers, D-Michigan, and said the White House would have to decide whether Rove will be able to testify.

END_OF_DOCUMENT_TOKEN_TO_BE_REPLACED

Ruckelshaus was serving as deputy attorney general in 1973 when he made history as part of the infamous Saturday Night Massacre. He and his boss, Attorney General Elliot Richardson, were fired after they refused Nixon’s order to dismiss the independent counsel investigating the Watergate break-ins.

The former Nixon FBI director and secretary of the Environmental Protection Agency hopes to help Obama defeat Democratic rival Sen. Hillary Clinton in the May 6 primary in Ruckelshaus’ homestate of Indiana. The state has been a longtime Republican stronghold in presidential politics.

“Senator Obama’s ability to attract not only Democrats, but also Republicans and Independents, makes him uniquely qualified to build the broad coalitions needed to address our nation’s challenges,” said Ruckelshaus in a statement.

END_OF_DOCUMENT_TOKEN_TO_BE_REPLACED

Clinton: President, not generals, will be in charge in Iraq

[cnn-photo-caption image= http://i.cdn.turner.com/cnn/2008/images/04/17/art.clinton0417.ap.jpg caption="Clinton is pledging to begin withdrawal in the first 60 days of her administration."] HAVERFORD, Pennsylvania (CNN) - Hillary Clinton declared Thursday she will begin withdrawing troops from Iraq within 60 days of becoming president, regardless of what her military advisers say about the situation on the ground at the time.

"You can see which way the questions are going," she firmly told a mostly female audience gathered at Haverford College, a small liberal arts school outside of Philadelphia. "What if the military commanders tell you its dangerous to withdraw? That question is backwards. The president tells the military commanders what the mission is."

Clinton has faced a slew of hypothetical questions from reporters about withdrawing from Iraq after she said last week that her rival Barack Obama cannot be trusted to end the war.

END_OF_DOCUMENT_TOKEN_TO_BE_REPLACED

Cheney: the joke's on you 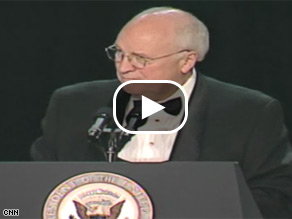 (CNN)– Vice President Dick Cheney tells a room full of journalists at the annual correspondents dinner that his feelings toward the media drove him to confession with the pope .

Obama says NC could crown him the nominee

"I think everybody understands how important this election is," he continued. "North Carolina is going to be critically important."

Obama brushes Clinton off his shoulders—literally 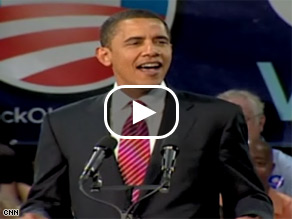 RALEIGH, North Carolina (CNN)-–Democrat Barack Obama said Thursday that rival Hillary Clinton was "in her element" at Wednesday night's debate, telling a North Carolina crowd she "took every opportunity to get a dig in."

He used his hands to motion brushing his shoulders off. "That's her right to kind of twist the knife in a little bit," he said, before adding that he understands why she's using what he calls the tactics of the GOP.

"That’s the lesson that she learned when the Republicans were doing that same thing to her back in the 1990s. ...So, I understand it," Obama continued.

"When you're running for the presidency then you’ve gotta expect it and you know you’ve just gotta kinda let it—" He paused, brushing his shoulders off with his hands before doing the same to his knees and pant legs.

"You know, it's what you gotta do," he said, to wild cheers from the Raleigh audience.

END_OF_DOCUMENT_TOKEN_TO_BE_REPLACED 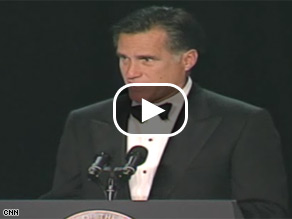 [cnn-photo-caption image= http://i.cdn.turner.com/cnn/2008/images/04/17/art.clintonabc.jpg caption="Hillary Clinton speaks during Wednesday's ABC debate."]
(CNN) - The morning after Hillary Clinton attacked Barack Obama over his relationship with William Ayers, founder of Weather Underground, her campaign advisers struggled with questions over her view of pardons for members of that group issued by her husband, former President Bill Clinton.

On a conference call with reporters, spokesman Howard Wolfson said he did not know where the New York senator stood on the pardons, but that he would check.

The Obama campaign has responded to Clinton’s questions to the Illinois senator at Wednesday night’s ABC debate with press releases pointing to the former president’s pardons of Weather Underground members Susan Rosenberg and Linda Evans.

The group, which formed in the 1960s, sought the overthrow of the U.S. government, and carried out violent attacks including bombings.

It looks like Hillary Clinton and John McCain have found a common enemy in Barack Obama.

As the Financial Times puts it: "The 2008 presidential race has boiled down to a fight of two against one”... meaning McCain and Clinton versus Obama.

Perhaps this shouldn't come as much of a surprise being that Obama is now the Democratic front-runner. Clinton needs to knock him out and win big in Pennsylvania on Tuesday in order to have a shot at the nomination. And McCain – unlike the Democratic candidates – already has the luxury of focusing on the general election.

Aides to the presumptive Republican nominee say they'd prefer Clinton as an opponent because of her high negative ratings. Yesterday in the Cafferty File we told you about a poll that shows 58% of Americans say Clinton is not honest and trustworthy.