Blitzer: 'On my best behavior' during papal meeting 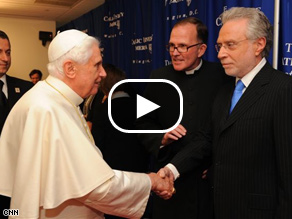 WASHINGTON (CNN) - I promised you I would report on my wonderful opportunity actually to meet Pope Benedict XVI while he was on the campus of The Catholic University of America in Washington, D.C. It was a very special moment for me.

Accompanied by Father David O’Connell, the President of Catholic University, the pontiff walked into a small room where ten invited guests were anxiously awaiting his arrival. He could not have been nicer. He graciously shook hands with all of us, and gave us each a gold medal showcasing his visit to the United States. This is something I will always treasure.

Father O’Connell, in introducing me to the Pope, noted that I work for CNN. The Pope said something about that being “very important.” I told him that it was wonderful of him to honor the United States by paying this historic visit.

One footnote: My friend Tim Russert, the NBC News Washington Bureau Chief, was also among the special guests invited to meet with the Pope. The two of us are both originally from Buffalo, New York, and we couldn’t help but reflect on how extraordinary it was for two Buffalonians - one from the South Side and the other from the North Side - winding up in Washington and receiving this high honor. I think we both were pinching ourselves. Needless to say, we were both on our best behavior.

Former President Jimmy Carter has been making waves this week with his trip to the Middle East.

Carter's trip drew condemnation from the U.S. and Israeli governments; both consider Hamas a terrorist organization. Carter has said he's not a negotiator, but that he's "just trying to understand different opinions and... provide communications between people who won't communicate with each other." Critics say it's not useful to engage in diplomacy with a group like Hamas, and most Israeli officials have refused to meet with Carter.

His trip raises larger questions about what exactly former presidents should be doing with their time out of office, which could be many years for someone like Bill Clinton or the current President George Bush.

“I believe that Senator Obama has a rare ability to restore America’s credibility and moral authority and to get others to join us in tackling serious global problems that will determine our own well being and security,” Nunn said in a statement.

Senator Nunn served as chairman of the Senate Armed Services Committee for 10 out of his 25 years in the Senate. Senator Boren was the longest-serving Chairman of the Senate Select Committee on Intelligence and one of President Bill Clinton’s top choices to replace Les Aspin in 1994 as U.S. Secretary of Defense. Between the two, they have nearly 60 years of high ranking Senate experience.

Boren said in a statement, “Our most urgent task is to end the divisions in our country, to stop the political bickering, and to unite our talents and efforts,” citing Obama as the best Candidate to do so.

END_OF_DOCUMENT_TOKEN_TO_BE_REPLACED

(CNN) - John McCain made nearly $420,000 in taxable and non-taxable income in 2007, according to the Arizona senator's tax returns just released by his presidential campaign.

The filing does not include his wife Cindy's much larger income - the two have long filed separate tax returns. An heiress to a beer distributing company, Cindy McCain is estimated to be worth approximately $100 million. But since those assets are in his wife's name, McCain is unable to tap into them for his presidential bid.

The staff has grown from 100 to 150, the polling team has been set up, and a new speechwriter has been hired, campaign manager Rick Davis told reporters in a briefing that included top McCain advisers. The size of the campaign’s media operation has also tripled.

The presumptive nominee now also has a "Victory Chair" in every state in charge of local fundraising. The goal: to convince supporters to contribute as much as $70,000 to his White House run through donations to his campaign, to the national party and to special committees set up to help get out the vote efforts in a handful of key swing states.

McCain’s campaign, which has been outpaced in the fundraising race by both his Democratic opponents, raised $15 million in March and has $10 million in the bank. This week, it reached the 200,000-donor mark.

Davis said new regional campaign managers had joined the staff, and that different plans had been crafted to deal with Barack Obama or Hillary Clinton candidacies.

“We have no preference” between the two, said senior strategist Charlie Black. “I'm not sure that one is easier than the other.”

McCain to release his taxes, but not Cindy's

[cnn-photo-caption image= http://i.l.cnn.net/cnn/2008/POLITICS/04/03/mccains.money.politics.ap/art.mccains.file.gi.jpg caption=" Cindy McCain's worth is estimated to be over $100 million. The fortune is not in Sen. John McCain's name."]

(CNN) - John McCain and wife Cindy do not file joint tax returns, and the campaign said Friday they will not release her 2006 and 2007 tax returns along with the candidate's.

The campaign argues that the two keep their finances separate, and that she has privacy concerns for her kids.

The Obamas and the Clintons both file taxes jointly.

Some of Cindy McCain's financial statements have been released as part of regular Senate disclosures.

The McCain campaign notes John Kerry's wife, Teresa Heinz, did not release her complete tax returns during the 2004 campaign.

An heiress to her father's stake in Hensley & Co. of Phoenix, Cindy McCain's worth has been estimated to be around $100 million.

ERIE, Pennsylvania (CNN) -– In what seems to be a continuing battle between Barack Obama and Hillary Clinton over who is more "in touch" with the average American, the Illinois senator made a stop outside a Pennsylvania beer distributing company Friday and tried to made clear his fondness for the fermented alcoholic beverage.

"We like beer," Obama told a group that had gathered outside, according to a media pool report.

Pennsylvania Sen. Bob Casey was in tow, as well. The two of them had just left a tour of the Erie Bolt Company, and noticed a crowd of about 30 people congregating in front of the Erie Beer Company.

"The steel was interesting, but beer!" Obama exclaimed.

The two men did not sample any brews on this visit.

On Monday, the Illinois senator mocked Clinton for taking a shot of whiskey in front of TV cameras. But it's not that Obama hasn't made attempts to connect with voters in a bar, as well - On a bus tour stop on March 28, Obama had a few sips of beer with Casey in front of the press. He did not finish the beer.

Obama to appear on Daily Show

According to a Comedy Central press release, the Illinois senator's appearance will mark his third on the 'fake news' broadcast.

PHILADELPHIA (CNN) - In her first comments about the Wednesday evening’s controversial debate, Hillary Clinton accused Barack Obama of “complaining” about the broadcast and hinted her rival might not be equipped to handle the rigors of the Oval Office.

“I know he spent all day yesterday complaining about the hard questions he was asked,” she told an interviewer Friday morning on WTXF in Philadelphia. “Being asked tough questions in a debate is nothing like the pressures you face inside the White House.”

In campaign stops in Pennsylvania and North Carolina yesterday, Obama criticized both his rival and the debate format, accusing the moderators of focusing on trivialities and saying Clinton was “in her element.”

Seeing an opening after what some pundits regarded as a poor performance by Obama, Clinton used the morning show interview to make the case for her own toughness and determination.

END_OF_DOCUMENT_TOKEN_TO_BE_REPLACED

The nomination must be voted on by the Senate.

Preston administers the Small Business Administration, a job he began in July 2006. That agency advocates on behalf of small businesses, helps advance the economy and assists in rebuilding efforts following a disaster.