Bill Clinton: Hillary would be winning with GOP rules

PITTSBURGH, Pennsylvania (CNN) – Joining wife Hillary Clinton at a campaign rally on the eve of the Pennsylvania primary, former President Bill Clinton argued that if Democratic candidates were awarded delegates the same way as Republicans, his wife would be beating Barack Obama in the race for the 2,025 delegates needed to secure the Democratic nomination.

“If we were under the Republican system, which is more like the Electoral College, she'd have a 300 delegate lead here,” Clinton told the Washington Post. “I mean, Senator McCain is already the nominee because they chose a system to produce that result, and we don't have a nominee here, because the Democrats chose a system that prevents that result.”

Many states in the Republican primary race award delegates on a winner-take-all basis, whereas every state on the Democratic side uses a proportional system.

The former president has been shuttling back and forth between eastern and western Pennsylvania over the past few days, shoring up votes for his wife in this crucial primary contest.

END_OF_DOCUMENT_TOKEN_TO_BE_REPLACED

McCain joins in a dance 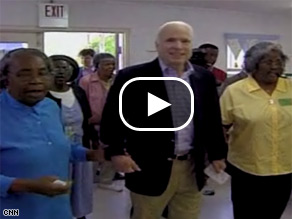 (CNN)– John McCain was welcomed by a group of gospel singers in Alabama and joined them for a dance.

(CNN) - Elizabeth Edwards, wife of former Democratic presidential candidate John Edwards, is tangling with John McCain’s campaign again – this time in a war of words with the candidate himself.

In an interview on ABC’s This Week on Sunday, the presumptive Republican nominee told George Stephanopoulos that Elizabeth Edwards had taken a “cheap shot” at him by saying that he had enjoyed government healthcare for his entire life – and that all Americans should be able to choose from the same insurance options available to members of Congress and military personnel.

“It’s a cheap shot but I did have a period of time where I didn’t have very good healthcare, I had it from another government,” said McCain, referring to the years he spent as a prisoner of war. “Look, I know what it’s like not to have healthcare.”

And when laying out his policy disputes with Democrats over the issue, he added, “in all due respect to Elizabeth Edwards.”

Edwards – now a Senior Fellow at the Center for American Progress –responded Monday in a post on the Wonk Room blog.

END_OF_DOCUMENT_TOKEN_TO_BE_REPLACED

BLUE BELL, Pennsylvania (CNN) – It's now been ten days since Democrat Barack Obama has made himself available for questions from his traveling press corps, and it appears as though that number could rise even higher.

Aides have said it's unlikely he’ll hold an availability with reporters before Tuesday's Pennsylvania primary, but that they "could always add one." Given their track record over the past few days, however, that doesn't sound promising.

Since the start of the weekend, the possibility of a press conference has been dangled in front of reporters twice—only to be snatched away at the last possible moment.

On Saturday, reporters were teased for the majority of the day with a possible evening avail, only to be told at the eleventh hour that it would not be happening. To make it up, staffers said they were aiming to put him in front of cameras on Sunday but that, too, did not happen.

And at a diner Thursday morning, a reporter slipped in a question about former President Jimmy Carter's meeting with Hamas, but Obama responded by saying he just wanted to eat his waffle. Later that afternoon while taping an interview for "The Daily Show," a reporter tried to ask Obama about a new Clinton ad and the Obama ad that came as a response. According to a pooled report, the White House hopeful asked the reporter if she was "supposed to be" asking a question then. He added that he would consider answering but that it would depend "on how well behaved you are." In the end, he did not take the question.

Traveling press secretary Jen Psaki declined to comment on exactly why no time has been allotted for traveling press questions since a press conference in Indianapolis April 11. Obama did, however, make time Thursday for a few one on one interviews.

CNN president Jon Klein announced that Snow, a long-time political observer with a longstanding news background, will contribute to CNN as the network continues to broadcast winning political coverage.

Snow most recently served as press secretary to President Bush. For 10 years, beginning in 1996, he appeared on Fox News Channel as the host of Fox News Sunday, Weekend Live with Tony Snow and other programs. Before joining Fox, Snow served as a substitute "From the Right" co-host for CNN's Crossfire.

Snow has also been a newspaper writer, radio host and columnist, and a speechwriter in the administration of the first President Bush.

[cnn-photo-caption image= http://i.cdn.turner.com/cnn/2008/images/04/21/art.cindy.cnn.jpg caption="Cindy McCain appeared on The View Monday."](CNN)— Cindy McCain on Monday beat back accusations her husband is known to have a bad temper, saying it’s often mistaken for his passion for the issues.

“He is passionate about the future of this country,” Mrs. McCain, wife of presumptive Republican Presidential nominee John McCain , said while serving as a co-host on ABC’s “The View.” “Some people mistake that for temper.” Mrs. McCain also insisted the issue is one of the biggest misconceptions people have of her husband.

The Arizona senator defended the claims again Sunday after The Washington Post devoted a portion of its front page to a lengthy investigation into McCain’s past.

Earlier this month McCain told CNN’s Dana Bash voters should expect him to get angry sometimes.

Speaking on Monday, Cindy McCain also said while she is reserved about her place in politics, she is excited about having being part of “American history.”

Cafferty: How can McCain catch up with Democrats’ money?

Money talks, and these days John McCain is getting an earful. And it's not good.

McCain's advisers and some Republicans insist he'll have enough money to run a competitive race in the general election, but not everyone is convinced.

The Republicans have about $31 million in the bank, compared to $5 million for the DNC.

Blitzer: 'We could be in for a long night'

[cnn-photo-caption image= http://i.cdn.turner.com/cnn/2008/images/03/13/art.blitzer.jpg caption="CNN Anchor Wolf Blitzer"] (CNN) - Pennsylvania voters must now decide who will be a stronger Democratic presidential nominee in the general election against John McCain. The latest polls show Hillary Clinton ahead of Barack Obama - but those same polls show about 7 percent of the likely Democratic voters remain undecided. They could certainly tip the balance.

State officials also say that hundreds of thousands of new voters have registered – many of them about to vote for the first time. They represent a new element of the political equation, and they, too, could tip the balance. They represent a surprise factor.

In other words, we could be in for a long night tomorrow as the results come in. I will be anchoring our coverage from the CNN Election Center, beginning with The Situation Room at 4 p.m. ET.

If Clinton wins, even by a narrow margin, we will then gear up for the May 6 primaries in North Carolina and Indiana. I don’t think she would drop out. If she loses, however, her campaign would have to make a very tough decision.

END_OF_DOCUMENT_TOKEN_TO_BE_REPLACED

All three presidential candidates are scheduled to make taped appearances on tonight's episode, hoping to tap into the show's approximately 5 million weekly viewers. The messages will also come on the eve of the crucial Democratic presidential primary in Pennsylvania.

WWE says the appearances follow an invitation both Clinton and Obama to appear live on the show to settle the prolonged Democratic presidential race in the wrestling ring. This is not the first time the WWE has waded into politics: it unsuccessfully challenged Al Gore and George Bush to agree to an arm wrestling match in 2000. It has also launched a voter registration drive called Smackdown Your Vote.

Read what Clinton, aka "Hill-Rod," and Obama will say tonight after the jump. (The McCain campaigns have not released their scripts.)

END_OF_DOCUMENT_TOKEN_TO_BE_REPLACED

(CNN) - Top advisers to Hillary Clinton denied Monday that there was any contradiction between the New York senator’s criticism of Barack Obama for saying all three White House hopefuls would make better leaders than President Bush and her comment several weeks ago that she and John McCain, but not Barack Obama, were qualified to serve as commander-in-chief.

“There’s a difference in the context of how voters will look at a candidate in an election and how the person will govern,” said Clinton communications director Howard Wolfson on a conference call with reporters.