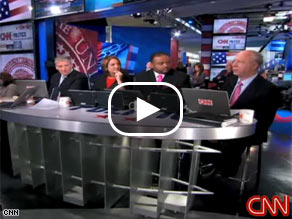 Watch the Best Political Team in News on what may be next for Democrats.

(CNN) – Watch CNN’s political team – the Best Political Team on TV and Online – as they discuss the possible fallout for Democrats from the hotly-contested Pennsylvania primary. Polling suggests that the loyalties of the supporters of Sens. Hillary Clinton and Barack Obama have only hardened after a six-week campaign in Pennsylvania that became progressively more negative as Tuesday night’s vote approached.

Watch Campbell Brown, John King, David Gergen, Roland Martin, and Gloria Borger weigh in on what it all may mean for the Democratic Party as they prepare to face Sen. John McCain, the Republican Party’s presumptive presidential nominee.