How much is a half-eaten waffle worth? 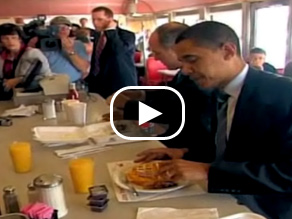 Watch Jeanne Moos weigh the value of the Obama waffle.

(CNN) - How much would you pay for a half-eaten waffle? How about: a waffle half-eaten by a White House hopeful?

The price tag eBay bidders settled on for a waffle served to - and half-consumed by - presidential candidate Barack Obama was at least $20,100. The auction was shut down and removed from eBay before anyone could bid any higher.

The waffle in question was the one referenced by Obama on Monday when the senator responded to a reporter’s question about Jimmy Carter’s meeting with Hamas by asking: “Why is it that I can’t just eat my waffle?”

“I guess one of my employees must have taken it and had an idea that they were going to do something with it,” the diner’s owner, Charles LeStrange, told CNN’s Jeanne Moos.

But the Scranton Times-Tribune reported on Wednesday that diner patron John Oakes was the responsible party. “We put it up there because we figured people are nuts and they might go crazy with it. And guess what — they did,” Oakes told the paper.

The bids of the cancelled auction have now been nullified, and the Illinois senator’s breakfast leftovers remain stored in Oakes’ freezer.