Who were those guys behind Obama? 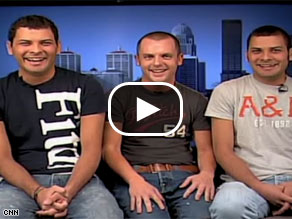 Watch those guys that were behind Obama.

(CNN) - The Internet has been abuzz since Sen. Barack Obama gave his concession speech Tuesday after losing the Pennsylvania Democratic primary to rival Sen. Hillary Clinton.  But, all  the talk hasn't been about anything said by Obama.  Instead, the attention has been focused on the three young men who were behind Obama wearing Abercrombie and Fitch t-shirts.

Watch John Roberts and Kyra Phillips interview "the Abercrombie guys" in this clip from American Morning.