Obama: 'I've been taking some hits' 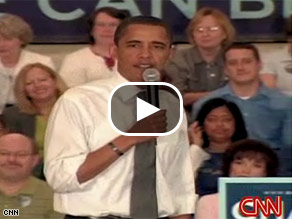 Watch Obama explain why he sometimes takes political punches without firing back.

(CNN) – Sen. Barack Obama used a question during a campaign event Saturday to explain his unusual approach to politics.

“How do we get rid of that huge divisiveness in this country?,” a voter asked Obama in Anderson, Indiana.

“The president sets the tone,” the Illinois senator said before explaining the bipartisan approach he’d take if elected to the White House.

“But, I’m also going to try to show this during the course of the campaign,” he added. “Sometimes you take some hits. Even during this campaign, I’ve been taking some hits.”

“I’m not interested in fighting people just for the sake of scoring political points.” “If I’m going to fight somebody it’s going to be fighting over the American people and what they need.”

Obama’s effort to explain his sometimes non-confrontational approach came on the same day that his rival Sen. Hillary Clinton proposed a Lincoln-Douglas style debate. Prior to Clinton’s challenge, Obama said in a television interview set to air Sunday that he would not agree to any more debates with Clinton before the May 6 primaries in North Carolina and Indiana. After learning of Clinton's proposal, the Obama campaign maintained that the Illinois senator would not participate in any more debates until after May 6.