Carter: Democrats will have a nominee soon 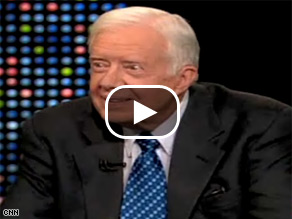 “There’s no way to have a peace agreement in the Holy Land without Hamas being involved in the final agreement,” Carter told Larry King in a wide ranging interview. “I thought maybe I could convince [Hamas] to be more accommodating.”

Carter came under fire recently for his trip to the Middle East where he met with leaders of Hamas and some top leaders in Syria, but he insisted Monday that no one from the State Department or the White House discouraged him from making the trip.

State Department spokesman Sean McCormack said Carter was free to speak to whomever he wanted. “I don’t think people are going to confuse the efforts of a private citizen with the very clear policies of the United States government," McCormack said last week.

On the domestic front, the former president said Monday both Barack Obama and Hillary Clinton should stay in the presidential race as long as they still have a chance to win.

Carter said both candidates have proven their place in the historic race citing Obama’s “new level of eloquence” and Clinton’s “tenacity” and ability to come out from the shadow of her husband, former president Bill Clinton.

Ultimately, “by the end of the primary season June 3, the Democratic Party is going to come back together and support a winner,” Carter said.

Asked about the speculation surrounding his potential endorsement of Obama’s candidacy, Carter reiterated he had no plans of endorsing until a nominee is chosen despite all of his grandchildren, children and their spouses in support of Obama.