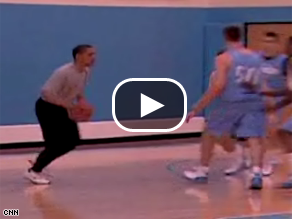 (CNN) - Barack Obama is known for his strong basketball skills, but the Illinois senator proved no match for the UNC Tar Heels Tuesday.

Obama practiced with the team for several minutes Tuesday morning, often struggling to keep pace with the Final Four-team and failing to sink a basket - at least when the cameras were turned on.

“These guys are a lot better than me,” Obama said as he was running down the full length of the court and trying to keep pace with the Division I players, including Tyler Hansbrough, the national player of the year.

At one point, Coach Roy Williams scolded his players for not guarding the presidential candidate.

“You guys are leaving the next president of the United States wide open,” Williams joked.

Obama took a couple of shots, but neither fell through. His campaign says he did make a three-pointer after reporters were escorted off the court.