Clyburn to Wright: ‘Silence is golden’ 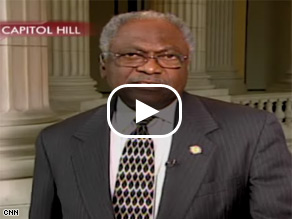 The Democratic congressman – who has not yet publicly backed a candidate – expressed relief over the controversial minister’s absence from the campaign trail the day after Barack Obama expressed called his comments “divisive and destructive.”

“Please let us go forward with this campaign… so that we can chalk a way forward that will be a benefit to our children and grandchildren,” Clyburn said in a message to Wright on CNN Wednesday, telling the pastor directly he should not continue to “inject himself” into the national discussion.

The South Carolina congressman repeated his pledge to remain neutral until a nominee is chosen, but did say he expected a clear nominee “within days” of the last Democratic primary contest on June 3.

“What I am trying to do is maintain a climate within our Democratic Party that allows good viable debate to take place that will add value to this campaign,” Clyburn told CNN’s Wolf Blitzer.

He rejected the notion that the candidate with the most pledged delegates should be the nominee, telling CNN that the nomination should be decided based on several important measures, including popular vote totals, the number of states a candidate has won, and an assessment of who will be most competitive against Republican John McCain in November.