Mum's the word for Michelle on Rev. Wright 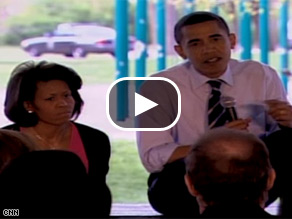 Listen to the Obama's remarks Wednesday.

INDIANAPOLIS, Indiana (CNN) –- Democrat Barack Obama's wife Michelle chose silence Wednesday when the couple were asked about recent comments made by their former pastor, and the harsh words Sen. Obama had for him Tuesday.

In a question-and-answer session with voters, the two were asked what kind of toll it takes on them to have to turn their backs on someone who had been good to them in the past.

Sen. Obama responded first, saying he "made a statement yesterday that was hard to make."

"What we want to do now though is to make sure that this doesn’t continue to be a perpetual distraction," he said.

Then he turned to his other half.

"Michelle, do you have anything to add to that?" After a brief hesitation he said, "You do, but..." He stopped and smiled as she shook her head.

"Remember, there are a lot of reporters around," he said, joining in the laughter.

Watch Michelle Obama speak out tonight in an interview with CNN's Suzanne Malveaux at 8:20 p.m. ET, with an extended version airing at on AC 360 at 10 p.m. ET