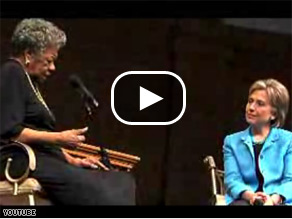 (CNN)—Legendary poet Maya Angelou appears to have increased her role in Hillary Clinton’s campaign over the past week - first releasing an open letter touting the New York senator’s character and now staring in a new 60 second television ad.

In the ad called “Maya,” Angelou touts Clinton’s mission of reaching out to working class voters.

“Hillary Clinton is a prayer of every American who really longs for fair play,” Angelou says. “Working men and women have had their jobs snatched from underneath them, their homes snatched away from them. And what we need, I think, is a person, a President who can make a difference in our country.”

The ad is airing in North Carolina, less than a week before the states primary on May 6.