Clinton to Congress: You’re either with us or against us

JEFFERSONVILLE, Indiana (CNN) – After several days of back and forth between Hillary Clinton and Barack Obama over whether a summer-long elimination of the gas tax would help or hurt, Clinton took a hard line, asking her colleagues in Congress to take sides.

“I believe it would be important to get every member of Congress on record,” Clinton told supporters at a rally in southern Indiana. “Do they stand with the hard-pressed Americans who are trying to pay their gas bills at the gas station or do they once again stand with the oil companies?

“I want to know where people stand and I want them to tell us, are they with us or against us when it comes to taking on the oil companies?” she added.

The “with us or against us” line wasn’t the only George W. Bush reference Thursday evening. Telling a story about Republicans crossing party lines and whispering their support to her, Clinton said, “It’s kind of like a little bit of a confessional when somebody comes and says, ‘You know I voted for George Bush, and I’m really sorry.’”

Obama used to tell a similar story that drew laughs about people whispering to him that they’re Republicans but are in his camp. Also whispering, he would respond, “Thank you, but why are we whispering?”

Commending Clinton in Jeffersonville for her ability to reach across the aisle to Republicans, renowned environmentalist Robert F. Kennedy Jr. introduced Clinton who holds what used to be his father’s New York seat in the Senate.

END_OF_DOCUMENT_TOKEN_TO_BE_REPLACED

Forty-six percent of registered Democratic voters questioned in a CNN/Opinion Research Corporation survey released Thursday support Obama as their party’s nominee and 45 percent back Clinton, a statistical dead heat when taking into account the poll’s 4.5 percent sampling error on that specific question.

“In mid-March, Obama had a 52 percent to 45 percent edge over Clinton, but his support has dropped six points while she has not gained any ground,” says CNN Polling Director Keating Holland. He adds that “six percent now volunteer that they want neither one to be the nominee; no Democrats in the March poll felt that way.”

So why is Obama losing support?

“Obama has lost his edge. Is it because of the controversy over his former pastor, Jeremiah Wright? While most Democrats have an unfavorable opinion of Wright, only 19 percent say Wright's statements have made them less favorable to Obama. More than two thirds say they've had no effect at all,” says CNN Senior Political Analyst Bill Schneider.

“The bigger problem appears to be Obama's string of losses to Clinton in big states like Pennsylvania and Ohio. Those losses have not driven up Clinton's support. But they may have created doubts about Obama's ability to win,” says Schneider.

END_OF_DOCUMENT_TOKEN_TO_BE_REPLACED

In a newly released statement, Fossella said he made an "error in judgment."

“As a parent, I know that taking even one drink of alcohol before getting behind the wheel of a car is wrong," Fossella said. "I apologize to my family and the constituents of the 13th Congressional District for embarrassing them, as well as myself.”

Fossella, a Republican, was stopped while driving in Alexandria, Virginia - a suburb of Washington, D.C.

The Post says court records show Fossella is scheduled to appear in Alexandria General District Court on May 12 for an advisement hearing.

Fosella has served in Congress since 1997.

McCain is framing the gas tax debate as a simple choice between helping working families or continuing to stifle their income with high prices at the pump.

“The lamentations of people about the draconian consequences of giving Americans just a little relief for the summer continues to amaze and amuse me,” McCain said at a press conference here, after touring the Cleveland Clinic to learn about new health information technology.

“I’d like to see families in America have a relief from ever increasing costs of gasoline,” he said, “so maybe at the end of the summer after this tax holiday they could buy school supplies for their children as they start the school year.”

Despite a chorus of criticism from independent experts who believe a gax tax holiday amounts to nothing more than ploy for votes that will do little to address long-term energy concerns, McCain and Democratic candidate Hillary Clinton have held firm in their calls for a temporary suspension of the tax.

END_OF_DOCUMENT_TOKEN_TO_BE_REPLACED

Clinton: I feel like the Goldilocks of this campaign

[cnn-photo-caption image= http://i.cdn.turner.com/cnn/2008/images/05/01/art.clintongold.ap.jpg caption="Clinton campaigned in Indiana Tuesday."]BROWNSBURG, Indiana (CNN) - As Hillary Clinton and John McCain’s separate proposals for a summertime elimination of the gas tax continue to be a focus for all three candidates, Clinton said Thursday insisted her plan isn’t a cure-all, but a temporary break for those feeling the pinch of high gas prices.

“Invariably someone will say something along the lines of, "Well, you know, we shouldn’t be doing these short-term fixes, we shouldn’t try to relieve people’s pain at the pump. We should only have long-term plans.’” Clinton told a small gathering outside Indianapolis. “We need both! It is not either/or.”

“Sen. Obama says we shouldn’t do it and it’s a gimmick, and Sen. McCain says we should do it but we shouldn’t pay for it.” She added. “I sometimes feel like the Goldilocks of this campaign. You know, not too much, not too little. Just right.”

“This isn't a real solution. This is a gimmick,” Obama countered. “This is what Washington does whenever there's a big problem. They pretend that they're solving it to try to get though political season but they don't really solve it.

Fresh swarm of superdelegates about to arrive

All superdelegates -– elected officials and Democratic National Committee members -– are not bound by their states’ results, and can vote for the candidate they choose. Both candidates are fighting just as hard for their support as they are for the votes of the people in the upcoming primary states.

But some superdelegates are unpledged add-ons - individuals selected by each state’s Democratic Party. They are elected at state party conventions, executive committee meetings or delegate meetings, depending on the state. A wave of those events are scheduled for the next few weeks, as states finalize their delegate slates.

Some of these add-ons pledged their support for candidates before they were elected. Of those elected so far, Obama has officially earned six unpledged add-on votes, while Clinton has earned seven.

In total, there will be 76 unpledged add-on delegates. CNN is keeping track of these delegates, but will only add them to the official delegate after they are officially elected at their states’ meetings. As of today, 13 states have chosen their unpledged add-ons, with the results of today’s Maryland selection still pending.

A CNN/Opinion Research Corporation survey released Thursday indicates that 71 percent of the American public disapprove of how Bush his handling his job as president.

"Bush's approval rating, which stands at 28 percent in our new poll, remains better than the all-time lows set by Harry Truman and Richard Nixon (22 percent and 24 percent, respectively) but even those two presidents never got a disapproval rating in the 70s," Holland added. "The previous all-time record in CNN or Gallup polling was set by Truman, 66 percent disapproval in January 1952."

CNN Senior Political Analyst Bill Schneider adds, "He is more unpopular than Richard Nixon was just before he resigned from the presidency in August 1974." President Nixon's disapproval rating in August 1974 stood at 67 percent.

END_OF_DOCUMENT_TOKEN_TO_BE_REPLACED

Cafferty: How can the GOP attract young voters? 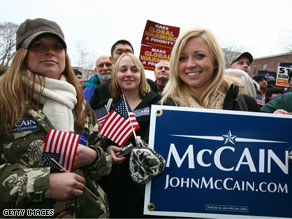 If you want to know which way the political winds are blowing, look at the young. Trends in the opinions of the youngest voters are often a barometer of shifting political tides. For the Democrats as we approach the 2008 election, this is great news…for Republicans, not so good. In fact, terrible.

The Pew research Center did a survey of young people between October of last year and March of this year. What they found was that the current generation of young voters who came of age during the George W. Bush years is giving the Democrats a wide advantage in party identification.

Blitzer: Should Clinton's swing state edge be a factor?

[cnn-photo-caption image= http://i.l.cnn.net/cnn/2008/images/01/16/art.blitzeriowa.cnn.jpg caption=" Blitzer: Could new polls sway some superdelegates?"] WASHINGTON (CNN) - There are new polls suggesting Hillary Clinton might fare better against John McCain in three key Electoral College battleground states in November than Barack Obama. These are states the two parties will be fighting over desperately in the general election – Florida, Ohio and Pennsylvania.

The polls are snapshots and are certainly not conclusive evidence that she would in fact be a more formidable candidate against McCain in those states than Obama. A lot, of course, can change between now and November. But the polls are significant because they could influence those still-undecided superdelegates – and perhaps even some decided superdelegates who can change their minds.

END_OF_DOCUMENT_TOKEN_TO_BE_REPLACED

[cnn-photo-caption image= http://i.cdn.turner.com/cnn/2008/images/04/10/art.clintonobama.ap.jpg caption="Clinton's campaign says she has 'automatic delegates.'"]
(CNN) - Following a surge in the pace of superdelegate endorsements, senior Clinton adviser Harold Ickes released a memo addressed to the Democratic Party’s “automatic delegates” that points to several new polls that suggest Hillary Clinton would be tougher to beat than Barack Obama in a general election bout.

(Ickes refers to superdelegates as “automatic delegates” because he says that term better reflects their status as party leaders and elected officials who are entitled to a vote at the Democratic convention.)

At least dozen superdelegates have publicly weighed in so far this week. Of those, roughly two-thirds have supported Obama, and one-third have backed Clinton.

“A spate of new public polls out this week confirms what we have been arguing for some time: Hillary Clinton is the strongest candidate to beat John McCain in November,” writes Ickes.