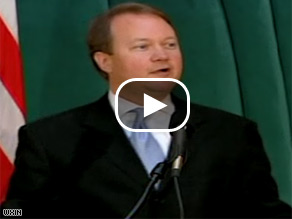 Joe Andrews said he wants to see an Obama-Bayh Ticket.

(CNN) - Former Democratic National Committee Chairman Joe Andrew - who was appointed to that post in 1999 by then-President Clinton - is withdrawing his endorsement of Hillary Clinton, and backing Barack Obama instead.

Andrew, who made a Thursday morning appearance at Obama's state headquarters in Indianapolis, said the time had come to "heal the rift in this party and unite behind Barack Obama now."

On a conference call with reporters and Obama campaign manager David Plouffe, Andrew said superdelegates need to make their decisions "now." He added that he'd like to see Obama pick Indiana Sen. Evan Bayh - a strong Clinton backer who has said the Jeremiah Wright controversy would pose general election problems for the Illinois senator - as his running mate.

"I'm going to be an advocate for an Obama/Bayh ticket," he said. Andrew will be doing local media interviews Thursday, and appearing at campaign events Friday.

Andrew released a letter Thursday morning explaining his decision. "Many will ask, why now? Why, with several primaries still remaining, with Senator Clinton just winning Pennsylvania, with my friend Evan Bayh working hard to make sure Senator Clinton wins Indiana, why switch now? Why call for super delegates to come together now to constructively pick a president?"

"The simple answer is that while the timing is hard for me personally, it is best for America. We simply cannot wait any longer, nor can we let this race fall any lower and still hope to win in November. June or July may be too late. The time to act is now."

The Indiana superdelegate served as party chairman from 1999 through 2001. He had endorsed Hillary Clinton last year, on the day she officially announced her White House bid.

With the switch, Clinton's lead over Obama among the party's superdelegates stands at 19.

Indiana voters head to the polls on Tuesday.

In response to Andrew, Clinton spokesman Phil Singer said, "We have seen record turnout in state after state because Democrats are excited and enthusiastic about this primary process."

"On Tuesday, Hoosiers will have their turn to come out in record numbers and support their candidate. We support that Democratic process and think that every American should be able to weigh in and support the candidate of his or her own choosing."