Michelle Obama: Let's move past Wright, get back to issues 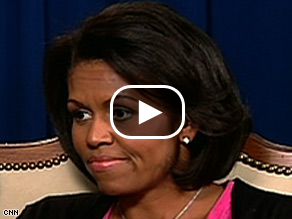 BOONVILLE, Indiana (CNN) - Michelle Obama said Wednesday that her husband's move to distance himself from his controversial former minister has been "painful," but that she's pleased with the way he's handled the situation.

"I was proud of the statement he made yesterday," she said in an interview with CNN's Suzanne Malveaux. "It was a tough thing for him to do - it's a painful situation to be in."

On Tuesday, Obama said he was "outraged" by comments the Rev. Jeremiah Wright made to the National Press Club in Washington on Monday. The candidate said he was "saddened by the spectacle" of what Wright said.