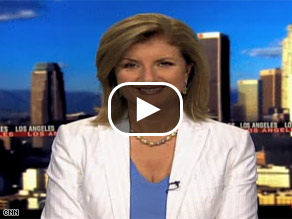 (CNN) – Arianna Huffington, Editor-in-Chief of the Huffingtonpost.com and author of a new book, didn’t pull any punches in assessing the 2008 presidential race.

Sen. Hillary Clinton “has really taken a page out of Karl Rove’s playbook when it comes to her advertising especially,” Huffington told CNN’s Wolf Blitzer Friday.

Huffington compared Clinton’s “3 a.m.” ad to advertising against Sen. John Kerry orchestrated by Rove during President Bush’s 2004 re-election bid. “The assumption was that if people elected Obama they would not be as safe as if they elected her.” “Their children would not be as safe,” added Huffington.

“And then on the eve of the Pennsylvania primary, we had the Osama ad appear,” Huffington said, refererring to a Clinton campaign ad that contained an image of Osama bin Laden, the alleged mastermind of the September 11, 2001 terrorist attacks.

“It is a very powerful image in America,” Huffington said of the bin Laden image. “Every election after 9-11 is going to be a national security election and manipulating the electorate’s fear has been key to the re-election of George Bush,” she added.

Huffington, the founder of the popular liberal news and commentary website, also shared her views on Sens. John McCain and Barack Obama, on the way the media is covering the Iraq war, and on “the extreme right of the Republican Party.” “Right is Wrong,” Huffington’s new book, was released recently.