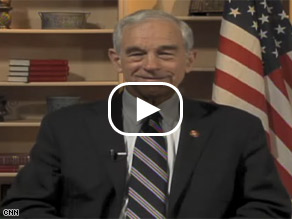 Paul on his presidential run: 'The race is still on'.

(CNN) - Even though Rep. Ron Paul has never officially ended his long shot presidential bid, he’s ready to weigh in on the three remaining major candidates for the White House.

In an interview on The Situation Room, Paul told Wolf Blitzer that endorsing Sen. John McCain, the Republican Party’s presumptive nominee, “would really confuse” his supporters “because they know we have a precise program and we have to defend that program.”

Having a Republican win the upcoming presidential election is “secondary” for Paul who is more interested in defending the Constitution, having the country go in what he considers the right direction, having a sound currency, and achieving balanced budgets. Paul parts ways with McCain over McCain’s support for the Iraq war, his approach to U.S. foreign policy in the Middle East and his willingness to spend federal dollars to support military operations in Iraq.

Paul recently released a new book titled “The Revolution: a Manifesto.” “Unfortunately, it is revolutionary to talk about obeying the Constitution,” Paul said of the book’s title.