HAGATNA, Guam (CNN) - They can’t vote for president in November, but today, their votes to help choose the Democratic nominee for president will make a difference. So residents in the tiny U.S. territory of Guam, with its population of nearly 175,000, continue to line up in a steady stream to cast ballots for either Hillary Clinton or Barack Obama.

Dededo resident Cathleen Moore-Linn stood in line for over an hour outside the old police precinct in Dededo, Guam’s most populated village. Despite the 90-degree tropical heat and no air conditioning at the polling site, she says, “Nobody left. A lot of manamko’ (elderly people) came out to vote. And people were filling out the forms to join the Democrat Party.”

At villages in the southern end of the island, which is far less populated, election committee member Nancy Weare says the voting is running smoothly. “There’s a constant flow of traffic, and good voter turnout.”

At stake are Guam’s four delegate votes at the national convention in Denver in August. Island voters today are electing eight delegates, who will each have a half vote at the convention. Two of Guam’s five superdelegates have already pledged one vote each to Clinton and Obama. The other three superdelegates, including congressional delegate Madeleine Bordallo, remain undeclared.

Vying for Guam’s delegate and superdelegate votes in their tight race for the nomination, the two remaining Democratic presidential hopefuls have inundated the island with radio and TV advertisements, each promising long-awaited political gains: the ability for Guamanians to be able to vote for president, lifting the territory’s cap on Medicaid, and perhaps the most coveted prize of all, war reparations in the form of over $120 million. A war reparations bill, sponsored by Bordallo, would issue payments to the survivors of Japan’s control of the island during World War II and would create educational and research programs about the occupation. The legislation is currently stalled in the U.S. Senate.

The polls closed on Guam at 8 p.m. local time (6 a.m. ET). Hand tabulation of the ballots is expected to take approximately three hours. In the island’s 2006 gubernatorial election, 55,311 people were registered to vote. The Democratic candidate received nearly 19,000 votes, and although voter turnout today is steady, election officials say it is not expected to be unusually high.

The latest CNN poll of polls out Saturday shows Obama has a 9 point lead with 50 percent to Clinton’s 41 percent among likely Democratic voters.

Both candidates continue to campaign hard in North Carolina ahead of Tuesday’s primary, where 115 delegates are at stake.

Clinton: Put down the Blackberry at home

Asked about advice on raising teenagers, Clinton told the audience it’s the quality of time with your children that matters.

In the MomLogic.com forum, she said, “be there when you’re there with them. It’s easy to be looking at your Blackberry, to be on the cell phone, to be distracted. Somehow you have to create the space and time.”

Clinton said it’s important that children “really, really know you they have your undivided attention.”

Parenting advice is also a common part of candidate Barack Obama’s stump speech, often telling his audience how to help children in school.

She told the audience in a high school auditorium and online that it's important to pick your battles with children, saying she chose not to fight with Chelsea Clinton when she showed up to President Clinton's second inauguration in a skirt she thought was way too short."

CNN’s Alexander Marquardt, traveling with the Clinton campaign, said she drew laughs talking about raising Chelsea in the White House.

Clinton said that meant “the Secret Service went on her dates. A lot of her girlfriends’ mothers liked when they double-dated, because there was a guy with a gun in the front seat.”

Chelsea returns to North Carolina to campaign Sunday. She was spotted Saturday afternoon at the Kentucky Derby in Louisville.

In the 30 second spot called “Turn,” Clinton highlights her plans for transforming the environment, providing affordable health coverage and her mission to bring troops home from Iraq.

“It’s going to take a fighter to meet these challenges,” she says. “If you give me the chance together, we’ll turn our country around.”

The state of Oregon holds its primary May 20 via mail-in ballots. There are 52 delegates at stake.

Obama continues to lead in Guam

Guam caucus officials merged some village returns together, reducing the total number of villages from 21 to 19.

(CNN) - Early vote returns from Saturday's Guam Democratic caucuses show Barack Obama with a small but early lead over presidential rival Hillary Clinton, although the bulk of the votes in the U.S. territory have yet to be counted.

With 2 out of 21 villages reporting, Obama won 188 votes to 105 for Clinton. Guam Democratic Party officials told CNN Saturday morning that the vote tabulation is ongoing but will take several more hours to complete.

Polls closed in Guam at 8 p.m. local time, or 6 a.m. eastern time. Four delegate votes are at stake in this event.

Life's a picnic for the Obamas 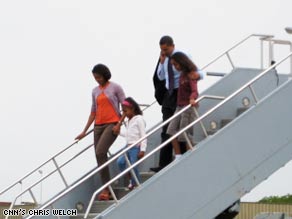 INDIANAPOLIS, Indiana (CNN) Stepping on to the tarmac in Indianapolis, Indiana, for a day of campaigning together, Barack Obama, wife Michelle, and daughters Sasha and Malia, will host a series of events together Saturday– including a picnic gathering in Noblesville and an ice cream social at a roller skating rink in Lafayette.