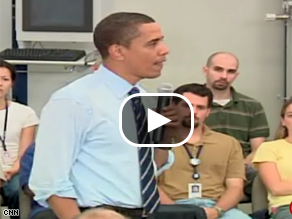 (CNN) – Sen. Barack Obama made a case for his ultimate electability in the general election in response to a question by an undecided North Carolina voter on the day before the state’s primary.

Obama conceded that his campaign has faced challenges during the last month since the bright light of front-runner status has been shined on him by the media, Sen. Hillary Clinton, and Republicans including Sen. John McCain, the GOP’s presumptive nominee.

“Once you’re a front-runner then it is, I think, the obligation of the candidates who are behind to try to whack you over the head and the press is happy to oblige,” he said only half jokingly. “There was a kitchen sink strategy employed,” he added.

“And we made some mistakes, some self-inflicted.” The Illinois senator also admitted Tuesday there was “no doubt” his campaign “took a hit” because of the controversy surrounding comments by his former pastor Rev. Jeremiah Wright, Jr.

“As tough a press month as we’ve had and as many attempts to knock us off stride as there have been, the fact that we’re still standing here and still moving forward toward the nomination, I think indicates the degree to which the core message of this campaign is the right one.”

“There’s something about our campaign that’s right, that’s true and I think can tap into the American people’s spirit for change,” he added after suggesting voters found him more trustworthy than his rival.

Then, Obama pivoted, turning his attention to McCain and laying out a number of policy differences between himself and the Arizona senator. “When that’s our debate, that is going to be, I think, a winner,” Obama said, adding that he believed he was “the best messenger” to deliver the Democratic Party’s policy positions to the public in a match-up with McCain.

“Sen. Clinton, despite what she says about being vetted, hasn’t gone through what I’ve been going over the last couple months because she’s not the front-runner” he said, after citing concerns about his failure to where a flag lapel pin and his association with William Ayres, a member of the 1960’s group The Weathermen.

Noting that he’s tied with McCain in polls and is making good showing in polls in some large states, Obama told the undecided voter “don’t buy into this electability argument.”