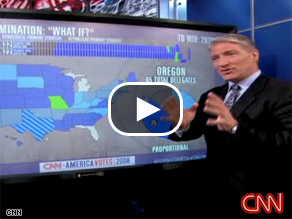 John King explains why superdelegates will ultimately pick between Sens. Clinton and Obama.

(CNN) - In this clip from American Morning, Chief National Correspondent John King breaks down the all-important race for delegates in the battle between Sens. Hillary Clinton and Barack Obama for their party’s presidential nomination.

Watch King explain why the Democrats’ superdelegates are likely to ultimately decide who will be the party’s nominee.