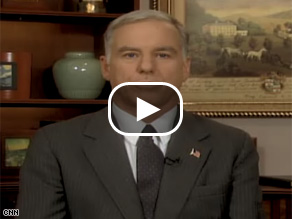 (CNN) – Howard Dean, Chairman of the Democratic National Committee, set forth three principles that he thinks should govern any effort to reach a compromise regarding seating the Michigan and Florida delegations to his party’s nominating convention.

First, “we want to respect the voters who went to the polls,” Dean said. “It was politicians that made a mess of this - not the voters,” he told CNN’s Don Lemon Tuesday.
“Secondly, you have got to respect these two candidates,” Dean said of Sens. Hillary Clinton and Barack Obama. “You cannot change the rules at the end of the game and change the outcome.”

“Thirdly, you’ve got to respect the 48 states that followed the rules they way they were supposed to,” the former presidential candidate said.

“So there will be some sort of compromise in the Rules Committee on the 31 of May, I hope,” the DNC chair said. “But we don’t know what that compromise is going to look like right now.”

While Clinton and Obama have continued to battle for the Democratic nod, the DNC has run ads targeting Sen. John McCain, the Republican Party’s presumptive nominee, and Dean took the opportunity to take a shot or two at McCain Tuesday.