Romney on Obama: the presidency isn't an 'internship' 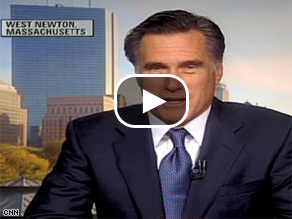 “He can read a prompter very well and energize a crowd,” said Romney. “But he has not accomplished anything during his life in terms of legislation, or leading an enterprise, or making a business work, or a city work, or a state work. He really has very little experience.”

The former Massachusetts governor, who has been mentioned as a possible running mate for presumptive Republican nominee John McCain, said voters will ultimately choose a candidate who has “been tested and proven” - a central theme of McCain’s primary and general election campaigns.