[cnn-photo-caption image= http://i.cdn.turner.com/cnn/2008/images/04/25/art.mccainobama.ap.jpg caption="John McCain's campaign said Barack Obama was hinting the Republican is too old for the Oval Office."](CNN) - John McCain’s campaign accused Barack Obama of making the presumptive Republican nominee’s age an issue after his Thursday remark that the Arizona senator was “losing his bearings as he pursues this nomination.”

"First, let us be clear about the nature of Senator Obama's attack today: He used the words 'losing his bearings' intentionally, a not particularly clever way of raising John McCain's age as an issue,” said McCain adviser Mark Salter. “This is typical of the Obama style of campaigning.

“We have all become familiar with Senator Obama's new brand of politics. First, you demand civility from your opponent, then you attack him, distort his record and send out surrogates to question his integrity. It is called hypocrisy, and it is the oldest kind of politics there is.”

Earlier on CNN, Obama that McCain's contention that Hamas wants Obama to be president was “offensive, and I think it's disappointing, because John McCain always says ‘I am not going to run that kind of politics.’ And to engage in that kind of smear is unfortunate, particularly because my policy toward Hamas has been no different than his.

“…So for him to toss out comments like that I think is an example of him losing his bearings as he pursues this nomination. We don’t need name calling in this debate.”

END_OF_DOCUMENT_TOKEN_TO_BE_REPLACED 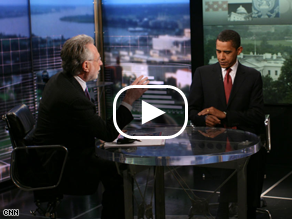 END_OF_DOCUMENT_TOKEN_TO_BE_REPLACED

WASHINGTON (CNN) - Hillary Clinton made a personal appeal to Barack Obama Thursday to work with her to make sure Florida and Michigan Democrats votes are counted in the race for the Democratic presidential nomination.

Clinton and Obama are at odds over how to deal with these two states, both of which broke Democratic National Committee rules that resulted in their loss of delegates. Clinton would benefit if Michigan and Florida delegates were allocated according to their January primary results. She made the appeal in a letter that was made public by her campaign.

(Full letter after the jump)

END_OF_DOCUMENT_TOKEN_TO_BE_REPLACED

Blitzer on Obama: He seemed at ease

WASHINGTON (CNN) - Having interviewed Senator Barack Obama on several occasions in recent years, I must say he seemed very relaxed and at ease when we spoke in The Situation Room today. On earlier occasions, he often seemed more wound up and intense. That was certainly true during the four Democratic presidential debates that I moderated over the past year. On this day, however, he seemed very comfortable and very confident. And with good reason.

I showed him the new issue of Time magazine, which features him on the cover, along with the words: “And the winner is…” Asked for his reaction, he said: “I don’t want to be jinxed. We’ve still got some work to do.” It reminded me of superstitious athletes who fear having their picture on the cover of Sports Illustrated.

Obama could not have been more effusive in his praise of Hillary Clinton. He kept calling her an “extraordinary” candidate. In response to a video question from a CNN I-Reporter, he said Senator Clinton would certainly be “on anybody’s short list” as a vice presidential running mate. “But it would be presumptuous of me at this point when she is still actively running, when she is highly favored to win two of the next three contests, for me to somehow suggest that she should be a running mate,” he said. “At this point, I think we have to resolve this process and then we can figure it out.”

While he had nice things to say about Hillary Clinton, he didn’t hold back in criticizing his other opponent, John McCain, on a host of domestic economic and national security issues. He seemed ready to move on to the next chapter of his campaign.

[cnn-photo-caption image= http://i.cdn.turner.com/cnn/2008/images/05/08/art.posters.z.gi.jpg caption="A group called 'Vote Both' is trying to push for a joint ticket."]

Now that Barack Obama appears on the verge of becoming the Democratic nominee, the buzz about a so-called "dream team" is starting up again.

ABC's George Stephanopoulos says that there are "intermediaries" discussing the possibility of an Obama-Clinton ticket. And he thinks Clinton "would be under some pressure and would like to accept." Former congressman Harold Ford also says an Obama-Clinton ticket is something the Democratic Party is going to have to seriously consider in the next few weeks.

There's even a group called "Vote Both” that's trying to push for such a ticket. It's seen as a way to unite the party after an often bitter campaign.

[cnn-photo-caption image=http://i.cdn.turner.com/cnn/2008/images/05/08/art.clinton.gi.jpg caption="Sen. Hillary Clinton says West Virginia is a test for her and Sen. Barack Obama."]
CHARLESTON, West Virginia (CNN) – Hillary Clinton told West Virginia supporters Thursday morning that any Democratic nominee needed to win their state to claim the presidency - and that every successful candidate since Woodrow Wilson had.

“It’s a test for me, and it’s a test for Sen. Obama because for too long we have let places like West Virginia slip out of the Democratic column,” said Clinton at a rally in the state capitol, during her second day of campaigning in the state.

“...I think the hard working voters of West Virginia represent the heart and soul of the Democratic Party and the backbone of our victory in November.”

Amid questions of whether she can still win the nomination, Clinton argued that she is beating Obama with the groups of people McCain will be targeting in the Fall – Catholics, Hispanics, blue-collar workers and senior citizens. Clinton also called McCain a "formidable" opponent.

END_OF_DOCUMENT_TOKEN_TO_BE_REPLACED

[cnn-photo-caption image= http://i.cdn.turner.com/cnn/2008/images/05/08/art.clintonwhite.ap.jpg caption=" Clinton campaigned in Washington Thursday."](CNN) - In what appear to be the New York senator's most blunt comments to date regarding a racial division in the Democratic presidential race, Hillary Clinton suggested Wednesday that "White Americans" are increasingly turning away from Barack Obama’s candidacy.

"I have a much broader base to build a winning coalition on," Clinton said in an interview with USA TODAY.

Clinton cited an Associated Press poll "that found how Senator Obama's support among working, hard-working Americans, white Americans, is weakening again, and how whites in both states who had not completed college were supporting me."

Speaking with the paper, Clinton rejected the notion her comments were racially divisive in any way.

"These are the people you have to win if you're a Democrat in sufficient numbers to actually win the election," she said. "Everybody knows that."

Weinstein and Pelosi talked on the phone late last month, the sources said.

The three officials spoke on the condition of anonymity because they were not authorized to talk publicly about the conversation.

They said Weinstein, a top supporter of Clinton's presidential campaign, appeared determined to buy Clinton more time in her battle against Sen. Barack Obama by pushing for the revote. He was also pressing Pelosi to back off her previous comments that superdelegates should support the candidate who's leading in pledged delegates in early June, the sources said.

[cnn-photo-caption image= http://i.cdn.turner.com/cnn/2008/images/04/03/art.barr.gi.jpg caption="Bob Barr will announce a presidential run Monday."]
WASHINGTON (CNN) – Former Republican Rep. Bob Barr will announce Monday that he will run for president as a Libertarian, a source close to the Georgian told CNN.

Barr will officially declare his candidacy at a news conference at the National Press Club in Washington. The four-term congressman left the GOP in 2006, saying that Republicans had "lost their core principles."

Barr made a name for himself in Congress for his ardent conservative philosophy and his role in President Clinton's impeachment. He lost a primary election in 2002.

Last month, Barr formed a presidential exploratory committee as he weighed a run for the White House. The source said that Barr had been considering a presidential bid "for several months. He currently runs Liberty Strategies, a consulting firm in Atlanta and Washington. 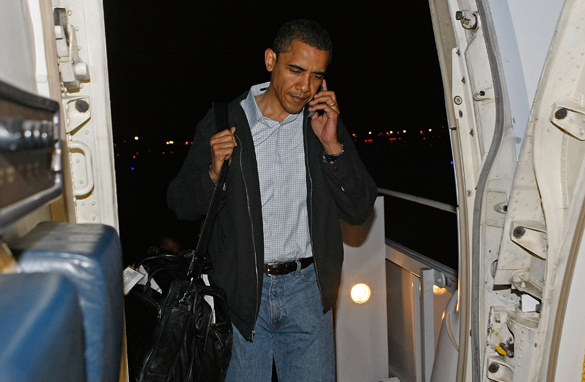