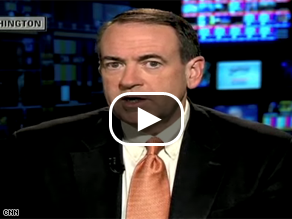 Huckabee faced pressure to end his own White House bid after it became mathematically impossible for him to become the Republican nominee. He stayed in the race several weeks longer, winning several contests, until John McCain captured the 1,191 delegates required to claim the GOP nomination.

On Thursday, Huckabee – who endorsed McCain, and recently launched his own political action committee – said public calls for an end to the Democratic contest were premature. “Now what if you did that in major league baseball, what if we did that in NFL football, once a team has got four or five touchdowns ahead we just said, ‘Look, it’s pretty inevitable here, the math doesn’t work, let’s end the game, so is that the way we ought to play it?’

“I got to give Hillary some credit that: yeah, it doesn’t look like she’s gonna get the nomination. But she entered this thing to play to the finish line - and I think that’s what she’s attempting to do.”