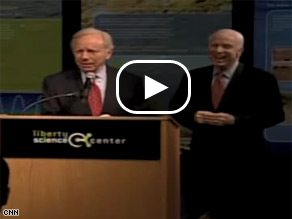 NEWARK, New Jersey (CNN) – John McCain on Friday defended his charge that the terrorist organization Hamas is rooting for Barack Obama to win the presidency - and said voters were welcome to discuss whether his age should be a factor in the fall campaign.

A Hamas official told an interviewer last month that the group approved of Obama's candidacy. Friday, McCain said the group's opinion is relevant - despite Obama's characterization of that opinion as a “smear.”

“It's very obvious to everyone that Senator Obama shares nothing of the values or goals of Hamas, which is a terrorist organization,” McCain said. “But it's also fact that a spokesperson from Hamas said that he approves of Obama's candidacy. I think that's of interest to the American people.”

McCain's campaign reacted with outrage Thursday to Obama's remark that the senator was “losing his bearings” over the course of the campaign - a phrase they said was a dig at the Arizona senator's age. But McCain himself said Friday the language didn't bother him.

Asked if the Obama comment was in fact a reference to his age - and whether that topic was a fair issue in the campaign - McCain said voters are welcome to discuss it.

“Any discussion in my view of any issue that the American people think is legitimate is up to them,” McCain said, adding that the topic of Obama’s former pastor Rev. Jeremiah Wright is also fair game.

“Every issue that the American people want to be an issue, if it's part of their discussions, it's fine with me, it's fine with me,” he said. “Just as the Rev. Wright’s remarks. I don’t believe that Sen. Obama shares his views in any way, but he has said it’s a legitimate topic of discussion. If that’s what the American people want to discuss, that’s fine.”

McCain said he will “display the same vigor and the same energy that I have been able to display throughout this campaign.”