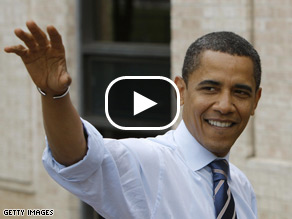 WASHINGTON (CNN) - Sen. Barack Obama closed in Friday on Sen. Hillary Clinton's lead among supedelegates, the Democratic party officials who hold the balance of power in determining which one will be the party's nominee for president in November.

The Obama campaign announced the support of two new superdelegates early Friday morning - including one who had been backing Clinton. Clinton also announced a new supporter, maintaining her lead over the Illinois senator, but only by a handful of delegates. (Related: Another Clinton superdelegate jumps ship to Obama)

Rep. Peter DeFazio of Oregon announced his support for Obama to his local newspaper, the Oregonian. Oregon voters are currently in the middle of primary voting, which takes place through the mail.

Rep. Donald Payne, a New Jersey Democrat and an early Clinton supporter, told the Newark Star-Ledger he was switching to Obama. He is the third person to leave Clinton for Obama in the past 72 hours. Former Sen. George McGovern, D-South Dakota, announced Wednesday he had decided to switch, as did a Virginia superdelegate.

Obama's huge victory over Clinton in North Carolina's Democratic primary Tuesday, coupled with a narrow loss in Indiana, put him within striking distance of the number of delegates he needs to cement the nomination.

A flood of endorsements from superdelegates could virtually end the race.

Obama paid an unusual half-hour visit to the floor of the House of Representatives on Thursday, where he was greeted enthusiastically.

He denied that he was campaigning, claiming he was "just saying hello" to members of the House. But he said he "let them know we'd love to have their support. There are some undecideds" in the House, Obama said as he was leaving.

"If they have questions for me, then I'm certainly happy to respond to them."

There are more than 70 undeclared Democrats in the House.

There are now more superdelegates than pledged delegates among those who remain undecided. Clinton's lead over Obama among superdelegates is now the narrowest it has been to date.