[cnn-photo-caption image= http://i.cdn.turner.com/cnn/2008/images/05/10/art.obamaoregon.ap.jpg caption="Barack Obama at a rally at the University of Oregon in Eugene, Oregon, Friday."]

The Democratic presidential frontrunner is campaigning today in Oregon, which holds its primary on May 20th.

He's off the campaign trail Sunday for Mothers Day, but expect the senator from Illinois to come to West Virginia at the beginning of the week.

Rival Hillary Clinton made campaign stops in the state on Wednesday and Thursday and is scheduled to return tomorrow and Monday. The Senator from New York is favored to win Tuesday’s primary.

She leads most polls in West Virginia by thirty to forty points.

Twenty-eight delegates are at stake when voters go to the polls in West Virginia. The state’ s primary is semi-open, which means that Democrats and Independents can vote in the Democratic primary.

Clinton picked up the votes of two more superdelegates and lost one since Friday night.

Rep. Ciro Rodriguez of Texas announced his support for the New York senator.

Arthur Powell was named an add-on superdelegate by the Massachusetts Democratic Party on Saturday and said he would vote for Clinton.

Obama, meanwhile, picked up three superdelegates since Friday night, including Carole Burke and Kevin Rodriquez of the Virgin Islands.

Rodriquez had backed Clinton but decided to switch his endorsement, citing Obama's ability to unite the Democratic Party and win the White House, according to Obama's campaign.

That brings Clinton's superdelegate total to 273 and Obama's to 271.

Superdelegates are Democratic officials who hold the balance of power in determining the party's presidential nominee.

[cnn-photo-caption image= http://i.l.cnn.net/cnn/2008/POLITICS/05/09/west.virginia/art.clintonwv.ap.jpg caption="Sen. Hillary Clinton campaigns in West Virginia."]
CHARLESTON, West Virginia (CNN) - West Virginians will head to the polls Tuesday for the state's Democratic primary between Sens. Hillary Clinton and Barack Obama. But what will the vote there really mean after new delegate totals show Obama with a sizable lead?

Some say it could send a sobering message to Obama's Democratic supporters.

West Virginia is expected to go for Clinton big time - and the polls show it.

Clinton has a 43-point advantage over Obama, 66 percent to 23 percent, according to a survey from the American Research Group released Friday.

The poll was conducted after Tuesday's primary results and carries a margin of error of plus or minus 4 percentage points.

Candidates walk a fine line on two sides of the U.S.

BEND, Oregon (CNN) - As they say in real estate, location, location, location. Sometimes where a candidate stumps is more telling than what they say on the stump. Today, Sen. Barack Obama is in Oregon, thousands of miles from the next primary state, West Virginia.

Campaigning in Bend, Oregon, Obama visited PV Powered, a company that produces photovoltaic cells a key component in solar energy systems. Not surprisingly Obama spoke about "investments in clean energy" and creating green jobs. The candidate, during a press availability this morning, even used a microphone he touted to reporters as partially solar powered.

Green plays well in Oregon, markedly less so in places like Kentucky and West Virginia, two other upcoming primary states where the coal industry provides thousands of jobs - at least 40,000 in West Virginia alone, and more than 15,000 in Kentucky.

Three days from now, West Virginians will cast votes in their state primary and polls show Sen. Hillary Clinton holds a massive lead over Obama - 66 percent to 23 percent, according to a survey released Friday from the American Research Group.

Obama hasn’t entirely given up on Coal Country. He plans to campaign in both West Virginia and Kentucky on Monday.

In the ad, they say Clinton has the "strongest plan to end the Iraq War and bring our troops home safely," according to the campaign.

The 30-second ad, dubbed "Strongest Plan," comes as Oregonians vote by mail in advance of the state's May 20 primary.

The Clinton campaign says the Wilsons played a "critical role in drawing attention to the Bush Administration's exaggerated claims about weapons of mass destruction in Iraq, and have been outspoken critics of the conduct of the war."

Obama: I want Clinton to 'feel good about the process'

WOODBURN, Oregon (CNN) – Asked Friday if he might consider helping Hillary Clinton raise money to relieve some of her campaign debt, Barack Obama said Friday that he has not yet talked to his staff about the possibility, but added he thinks any of the also-rans for the Democratic nomination would be in a "strong position" to help the eventual nominee.

Pressed by reporters, the Illinois senator continued, "Obviously I'd want to have a broad range discussion with Sen. Clinton about how I could make her feel good about the process and have her on the team moving forward."

"But as I said, it's premature right now. She's still actively running, and we've still got business to do here in Oregon and other states."

Obama's comments came at a media availability at a taco restaurant in Woodburn, Oregon - his first gaggle with press since the Indiana and North Carolina primaries.

"I had to face some very difficult spending decisions and I've had to conduct sensitive diplomacy. That's called planning for a wedding," Bush told the Hispanic Chamber of Commerce on March 12.

The plans are largely under wraps, but they call for gathering by a lake in front of an altar and four-foot high cross made from Texas limestone.

"This is the time when the wildflowers are all blooming. And I think it will be a very, very lovely wedding, and it will be very like Jenna and Henry," first lady Laura Bush recently said.

Jenna Bush told CNN's Larry King on April 24 that the wedding will include "all relatives, our families, really, kind of big. So it's half-family and then half-very close friends." More wedding details »

Not all of her friends will be on hand though. 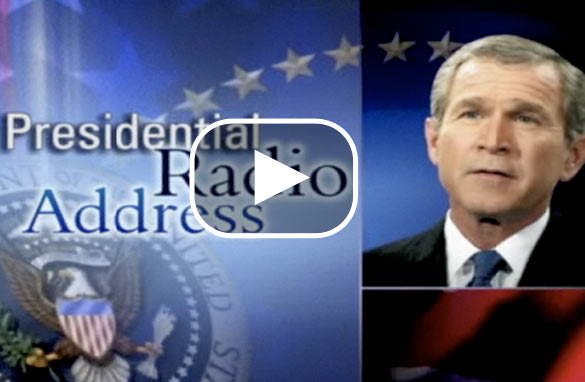 WASHINGTON (CNN) - In his weekly radio address, President Bush talks about his daughter's wedding and celebrating Mother's Day across the country.