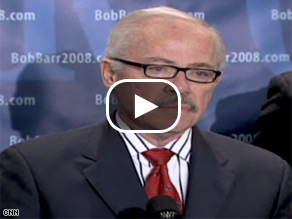 "If this is an extremely close election, even if Bob Barr gets a handful of votes, it could make a difference, just as Ralph Nader once did," Schneider said. "He is a conservative who attracts mostly Republican voters. He is critical of the Iraq war. McCain supports the Iraq war. There are many conservatism and Republicans who ware critical of the war in Iraq and some of them may decide to vote for Bob Barr to register their protests.

Related Video: Watch Senior Political Analyst Bill Schneider give his take on Barr's entry to the race and the latest superdelegate count.