Hagel laughs off - but won't rule out - joining an Obama ticket 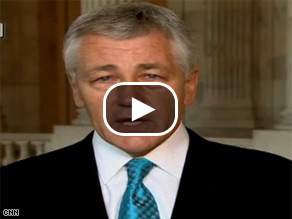 (CNN) - Republican Sen. Chuck Hagel, who has been mentioned as a possible running mate for Democratic Sen. Barack Obama, laughed off the possibility Tuesday in a CNN interview – but didn't rule it out, either.

But would he consider joining a bipartisan unity ticket with Obama? "I'm going to try and find some honest work," he said, adding that "If [Obama] asks, I'll let you know."

Hagel, a long-time friend and Senate ally of presumptive Republican nominee John McCain, has not yet endorsed any presidential candidate.