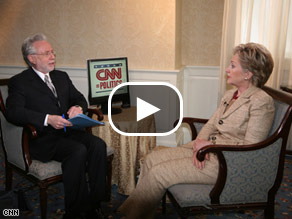 Watch a clip of Wolf Blitzer's interview with Sen. Clinton.

WASHINGTON (CNN) - Hillary Clinton choked up Wednesday as she told CNN's Wolf Blitzer that her daughter's presence on the campaign trail had been one of the "most incredibly gratifying experiences of my life."

"Well, it's one of the most incredibly gratifying experiences of my life, as a person and as a mother. I get very emotional," she said. "She is an exceptional person, and she's worked so hard, and she's done such a good job that I'm just filled with pride every time I look at her.

"Obviously, we are very close. We are in communication all the time. But she is doing this because she believes I'd be a good president, but also because she cares so much about our country's future. She did grow up in the White House. She knows what a difference a president makes. If anybody ever doubted what difference a president makes, after seven years of George Bush, I think the doubts should be put to rest.

Chelsea Clinton, who has been a constant presence on the trail this cycle, was in Puerto Rico Wednesday in advance of the territory's June 1 primary.

Watch Wolf Blitzer's interview with Hillary Clinton at 4 and 6 p.m. ET on CNN's The Situation Room.