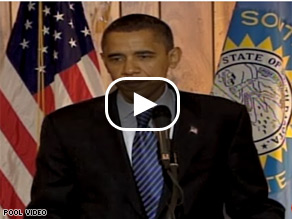 He said both Bush and McCain “have a lot to answer for” over the war in Iraq and the failure to find Osama bin Laden and Al Qaeda’s continuing strength, among other continuing foreign policy problems. “They are going to have to explain why it is that Iran is able to fund Hezbollah and poses the greatest threat to America and Israel and the Middle East in a generation. That's the Bush-McCain record on protecting this country.

The McCain campaign said Obama’s speech was a “partisan rant.”

“It was remarkable to see Barack Obama’s hysterical diatribe in response to a speech in which his name wasn’t even mentioned,” said McCain spokesman Tucker Bounds. “It would be a wonderful thing if we lived in a world where we don’t have enemies. But that is not the world we live in, and until Senator Obama understands that, the American people have every reason to doubt whether he has the strength, judgment and determination to keep us safe.”