Huckabee says he'd like to be McCain's running mate

“There's no one I would rather be on a ticket with than John McCain,” the former Arkansas governor said on NBC’s “Meet the Press.”

“Let me point out that all during the campaign, when I was his rival, not a running mate, there was no one who was more complimentary of him publicly and privately,” he said.

When Huckabee announced his candidacy in January 2007, the former Baptist pastor was best known for his dramatic weight loss. The 52-year-old governor dropped more than 100 pounds after being diagnosed with diabetes in 2003.

Huckabee went on to finish first in the Iowa caucuses January 3, placing him among the top tier of Republican hopefuls.

END_OF_DOCUMENT_TOKEN_TO_BE_REPLACED 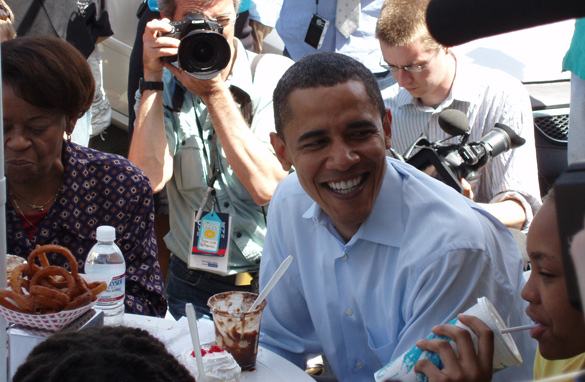 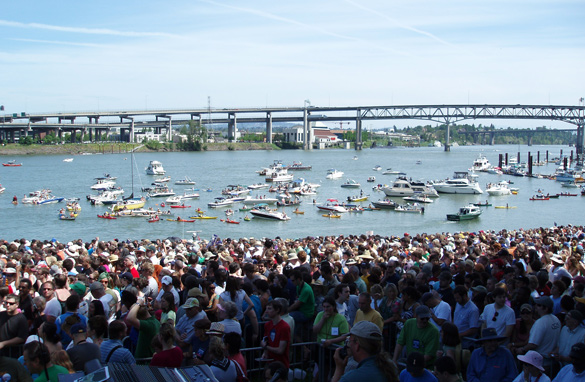 Thousands and thousands on land and water attend an Obama rally In Portland Oregon Sunday. Pleasure boats and kayaks along the Willamette River and Obama supporters in Waterfront Park. According to the Obama campaign, the rally is his largest gathering to date. Credit: Roselli/CNN.

WASHINGTON (CNN) - John McCain's national finance co-chairman has stepped down - the latest adviser to leave the Republican senator's presidential campaign due to ties with lobbyists.

Former Texas Congressman Thomas G. Loeffler, a major fundraiser for McCain, is the fifth person to leave the campaign in the last eight days over questions about lobbying or past connections to lobbyists.

"We all know that the administration has had contact with and is advocating contact with Hamas and other organizations,” Hart told CNN’s Wolf Blitzer on Late Edition. "So it was incredibly hypocritical."

While speaking to the Israeli parliament at a celebration of Israel’s 60th Anniversary, President Bush said: “Some seem to believe we should negotiate with terrorists and radicals, as if some ingenious argument will persuade them they have been wrong all along. We have heard this foolish delusion before.”

Many Democrats took these comments to be a veiled attack on Barack Obama’s foreign policy. Former presidential candidate Sen. Joe Biden, D-Delaware, called the president’s comments “bulls**t“ and House Speaker Nancy Pelosi said his actions were “beneath the dignity of the office of president.”

Obama responded to Bush’s comments on Friday by saying that they were “the kind of appalling attack that's divided our country and that alienates us from the world.”

END_OF_DOCUMENT_TOKEN_TO_BE_REPLACED

Clinton: 'Think about this as a hiring decision'

[cnn-photo-caption image= http://i.cdn.turner.com/cnn/2008/images/05/18/art.clinton.gi.jpg caption= "Sen. Hillary Clinton has vowed to stay in the race until all states have a say." ]
(CNN) - Despite Sen. Barack Obama's commanding lead in the delegate count, Sen. Hillary Clinton campaigned hard Sunday, telling voters she's "running for the toughest job in the world."

Clinton spent her weekend in Kentucky, which, along with Oregon, holds its Democratic contest Tuesday.

Clinton is favored in Kentucky, while polls show Obama with a comfortable lead in Oregon.

Speaking in Bowling Green, the senator from New York said it was a "treat" to have the whole state to herself since Obama would not be returning there.

Clinton has faced calls to drop out of the race since she trails Obama across all fronts - pledged delegates, superdelegates and the popular vote.

Clinton has recently been claiming a lead over Obama in the popular vote, a debatable claim, especially because the Democratic National Committee doesn't count the votes of Florida and Michigan, which Clinton does.

Florida and Michigan were stripped of their delegates for scheduling their primaries too early, and Clinton was the only top-tier candidate whose name was on the ballot in Michigan.

(CNN) - On Tuesday, Democrat Travis Childers won a key Mississippi House seat against Republican Greg Davis. The district was thought to be a stronghold for the GOP, with the seat held by Rep. Roger Wicker since 1994.

The state’s governor appointed Wicker to the Senate seat of Trent Lott at the first of the year. Many in Republican circles are interpreting this loss, along with those of two other House seats in traditionally conservative districts, as an ominous sign for the November election.

Meanwhile, the congressional Democrats raised over $44 million for the upcoming campaign, while Republicans have only pulled in an estimated $7 million. And earlier this week, retiring Republican Rep. Tom Davis of Virginia sent out a memo calling the current political climate “the worst atmosphere we've seen since Watergate.”

On ABC’s “This Week” House Minority Leader John Boehner spoke with George Stephanopoulos about the chances for Republican gains in the fall.

(Full roundup after the jump)

END_OF_DOCUMENT_TOKEN_TO_BE_REPLACED 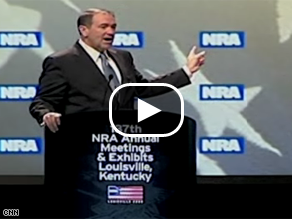 END_OF_DOCUMENT_TOKEN_TO_BE_REPLACED

Doctors look for cause of Kennedy seizure

[cnn-photo-caption image= http://i.l.cnn.net/cnn/2008/images/01/28/art.kennedy.cnn.jpg caption="Sen. Kennedy seems to be out of any 'immediate danger,' doctors say."]
BOSTON, Massachusetts (CNN) - Doctors at Massachusetts General Hospital Sunday were trying to determine the cause of Sen. Edward Kennedy's seizure.

Medical officials said the 76-year-old Democratic icon was in serious condition but seemed to be out of any "immediate danger."

Preliminary tests Saturday night determined Kennedy had not suffered a stroke, a physician at the hospital said.

Kennedy was flown to the hospital on a medical jet Saturday.

"Over the next couple of days, Sen. Kennedy will undergo further evaluation to determine the cause of the seizure, and a course of treatment will be determined at that time," said Dr. Larry Ronan, Kennedy's primary care physician. He added that Kennedy was "resting comfortably and watching the Red Sox game with his family."