(CNN)—Barack Obama has his eyes on the general election on the eve of the next set of Democratic primaries in Kentucky and Oregon, while Hillary Clinton tells voters the race is “nowhere near over.”

In the latest installment of CNN=Politics Daily, Suzanne Malveaux reports on the ongoing foreign policy dispute between Obama and John McCain—a preview of what we may see this fall.

Meanwhile, Clinton’s counting on a big win in Kentucky Tuesday and bracing for a loss in Oregon, but she also took the time to remind Obama that he hasn’t locked up the nomination yet. Senior Political Correspondent Candy Crowley reports from the campaign trail in Kentucky.

The presumptive GOP nominee aimed fire at Obama Monday, in an attempt to draw attention away from the fact that five of the Arizona senator’s aides have left his campaign due to new self imposed policies against campaign staffers with ties to lobbyist groups and special interests. CNN’s Dana Bash has the details.

Scenes from the trail: Obama in Montana 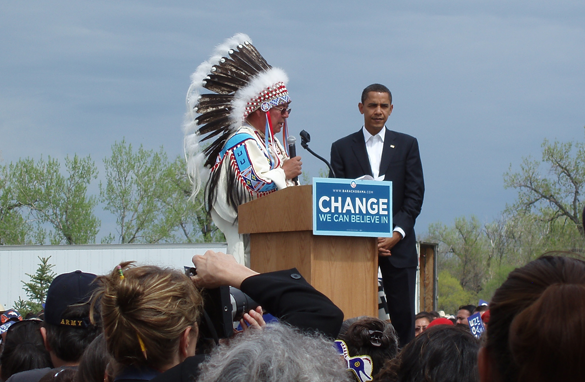 Barack Obama held a rally in Crow Agency, Montana at the Crow Indian Reservation. Obama was given the name of “Awe Kooda bilaxpak Kuuxshish” which means “One who helps people throughout the land.” Obama was adopted by a Crow couple named Black Eagle. He joked that he very much liked the idea of “Barack Black Eagle.” (Photo Credit: Mike Roselli/CNN)

Clinton cites Karl Rove as reason to stay in

[cnn-photo-caption image= http://i.cdn.turner.com/cnn/2008/images/05/19/art.clinton.5.19.jpg caption="Hillary Clinton campaigns in Kentucky Monday ahead of the states primary."]
PRESTONSBURG, Kentucky (CNN) – Hillary Clinton defended her reasoning for staying in the presidential race Monday afternoon by pointing out that Karl Rove's analysis shows her to be the strongest candidate against John McCain in November.

“There has been a lot of analysis about which of us is stronger to win against Sen. McCain, and I believe I am the stronger candidate,” said Clinton, repeating a line from her stump speech.

Then she veered from her usual argument.

“Just today I found some curious support for that position when one of the TV networks released an analysis done by – of all people – Karl Rove, saying that I was the stronger candidate,” said Clinton. “Somebody go a hold of his analysis and there it is.”

END_OF_DOCUMENT_TOKEN_TO_BE_REPLACED

Tracking Poll: Obama opens up biggest lead ever over Clinton

[cnn-photo-caption image= http://i.cdn.turner.com/cnn/2008/images/05/19/art.obama.oregonrally.jpg caption="An estimated 75,000 people came out to support Barack Obama Sunday in Oregon."]
(CNN)– Amid reports that the Democratic Party’s leaders and largest fundraisers are beginning to take steps to try to bring their party together after a long, hard-fought primary campaign, the latest Gallup daily tracking poll suggests Democratic voters are beginning to coalesce around Sen. Barack Obama.

Obama holds a 16-point lead over Sen. Hillary Clinton in Gallup’s latest daily tracking poll released Monday. He has the support of 55 percent of Democratic and Democratic-leaning voters while Clinton’s support is at 39 percent.

Previously, Obama’s largest lead over Clinton was 11 percentage points, in daily tracking polls conducted in mid-May and mid-April, according to Gallup. Prior to John Edwards’s exit from the Democratic nomination race, Clinton held a 20-point lead over Obama in mid-January.

The results are based on a survey of 1,261 Democratic and Democratic-leaning voters using combined data from May 16-18, 2008. The poll has a margin of error of plus or minus three percentage points.

Kentucky and Oregon hold their Democratic primaries Tuesday. Obama is favored in Oregon’s contest and Clinton in Kentucky’s, according to CNN’s latest poll of polls in each state.

[cnn-photo-caption image= http://i.cdn.turner.com/cnn/2008/images/05/19/art.obama.5.19.jpg caption="Obama has been focusing lately on campaigning in general election states."]
WASHINGTON DC (CNN)– He’s not declaring victory in the Democratic primaries, but if you listen to Barack Obama, you get a clear sense he’s more than ready for a fall fight with John McCain.

“Everybody is surprised that I am standing here. Lets face it, nobody thought a 46 year old black guy named Barack Obama was going to be the Democratic nominee. The reason this has worked is because of you. You decided you wanted to take your government back and that is what we are going to be fighting for all the way through November,” the Senator from Illinois told the crowd at a rally in Oregon Sunday.

An interesting choice of words from a candidate who lately has been careful to not proclaim victory in his long and bitter battle with Senator Hillary Clinton (D-New York) for the Democratic Presidential nomination.

"Senator Clinton and I have had a terrific contest and she has been a formidable candidate,” Obama said Sunday while being questioned by reporters. The slip into the past tense is telling.

Obama’s choice of where he holds primary night campaign rallies is also a sign that he’s looking ahead to the general election.

END_OF_DOCUMENT_TOKEN_TO_BE_REPLACED

Clinton: 'This is nowhere near over'

[cnn-photo-caption image= http://i.cdn.turner.com/cnn/2008/images/05/19/art.clintonover.ap.jpg caption="Clinton said Monday the Democratic race is not over."]MAYSVILLE, Kentucky (CNN) - Hillary Clinton took a hard line on the state of the Democratic race Monday morning, telling supporters that it is "nowhere near over."

“This is nowhere near over, none of us is going to have the number of delegates we’re going to need to get to the nomination,” she argued.

A campaign spokesman clarified, explaining that short of a deluge of superdelegates, Clinton believes neither candidate will have the necessary 2,210 delegates by the last primary on June 3, the number she says is needed because she argues Michigan's and Florida's delegates must be counted.

The Democratic National Committee has set the number of delegates needed at 2,026 after stripping those states of their delegates for moving up their primaries.

END_OF_DOCUMENT_TOKEN_TO_BE_REPLACED

Blitzer: Are candidates' spouses off limits?

[cnn-photo-caption image= http://i.cdn.turner.com/cnn/2008/images/05/19/art.blitzer.ap.jpg caption="Spouses of all three remaining presidential candidates have been on the hot seat this campaign season."]WASHINGTON (CNN) - Barack Obama came out swinging Monday – not only in defending his national security stance on Iran but also in defending his wife, Michelle. At issue: GOP ads in Tennessee railing against Michelle Obama’s comment a few months back that “for the first time in my adult lifetime, I’m really proud of my country.”

The senator told ABC “these folks should lay off my wife.”

He said his critics can say whatever they want when it comes to his track record.

“If they think that they’re going to try to make Michelle an issue in this campaign, they should be careful because that I find unacceptable, the notion that you start attacking my wife or family.”
He praised Michelle as “the most honest, the best person I know” and “one of the most caring people I know. She loves this country. And for them to try to distort or to play snippets of her remarks in ways that are unflattering to her, I think, is just low class.”

Spouses of candidates have been targeted in this campaign. Bill Clinton’s comments and record have been widely scrutinized. Cindy McCain’s wealth and her refusal to release her income tax and other financial records have been examined.

Four years ago, John Kerry’s wife, Teresa, was criticized for various comments. Back in 1992, Hillary Clinton became an issue when she said she was not going to sit around and simply “bake cookies.”

Cafferty: What role did sexism play in Clinton’s likely defeat?

Hillary Clinton says she's running for president "to break the highest and hardest glass ceiling" in the United States. But every day, it looks less and less likely that she'll succeed.

The New York Times reports today about what Clinton's all-but-certain defeat will mean for women. Clinton set records for a campaign by a woman, raising more than $170 million, often getting better debate reviews than her male competitors, rallying older women and getting white men to vote for her.

There are even those who believe Clinton was able to use sexism on the trail to her advantage, by bringing in more votes and donations after instances where many believed she was being unfairly picked on because she is a woman.

There is no question she has done exceedingly well only to finish second behind Barack Obama.

Ferraro suggests she may not vote for Obama

[cnn-photo-caption image= http://i.cdn.turner.com/cnn/2008/images/05/19/art.ferraro.ap.jpg caption=" Ferraro is a supporter of Clinton's presidential campaign."](CNN) - Geraldine Ferraro, the outspoken former Democratic vice presidential candidate and a supporter of Hillary Clinton's White House bid, told the New York Times she may not vote for Barack Obama should he be the party's nominee.

Ferraro, a former member of Clinton's finance committee who resigned that post earlier this year after making comments many viewed as racially offensive, also said she thinks the Illinois senator has been "terribly sexist" over the course of the presidential campaign.

The comments appear to underscore the potential difficulty Obama may have courting some women voters in the fall - many of whom have said they feel a solidarity with the New York senator over the barriers Clinton faces in her bid to become the first female president.

Ferraro has not shied away from discussing the impact of race and gender throughout the Democratic presidential campaign. In March, the former congresswoman told a California newspaper the chief reason Obama's candidacy was successful was because he was black.

Ferraro also said Clinton had been the victim of a "sexist media."

Obama later called those comments "ridiculous," and Clinton said she disagreed with them.

Ferraro maintained her comments were not racist, but ultimately resigned from the Clinton campaign after they caused an uproar.

"The Obama campaign is attacking me to hurt you. I won't let that happen," she wrote in her resignation letter to Clinton, adding, "I am who I am and I will continue to speak up."

Byrd, 90, has served as West Virginia's senator for nearly fifty years, and is one of the chamber's most vocal critics on the war in Iraq.

"After a great deal of thought, consideration and prayer over the situation in Iraq, I have decided that, as a superdelegate to the Democratic National Convention, I will cast my vote for Senator Barack Obama for President," Byrd said in a statement released by his office. "Both Senators Clinton and Obama are extraordinary individuals, whose integrity, honor, love for this country and strong belief in our Constitution I deeply respect."

"I believe that Barack Obama is a shining young statesman, who possesses the personal temperament and courage necessary to extricate our country from this costly misadventure in Iraq, and to lead our nation at this challenging time in history," Byrd also said. "Barack Obama is a noble-hearted patriot and humble Christian, and he has my full faith and support."

The endorsement is not without symbolism. Byrd was a leader of the local chapter of the Ku Klux Klan as a young man and was, along with several southern Democrats, an opponent of the Civil Rights Act of 1964. He has since denounced his previous views on racial segregation.