Exit Polls: Clinton runs the board in Kentucky 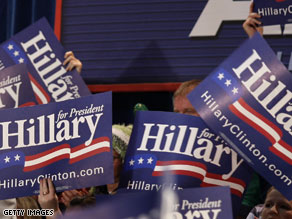 (CNN) - Early exit polling from Kentucky shows the magnitude of Hillary Clinton’s victory there. Clinton won among men 62 to 32 percent. She won among women 67 to 27 percent.

Clinton won among people of all education levels: 74 to 21 percent among Kentucky Democratic voters who have no college education and 60 to 34 percent among college-educated voters.