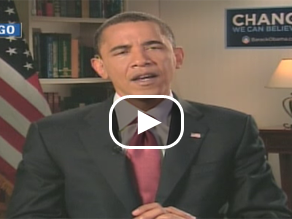 (CNN) - In a CNN interview Tuesday, Barack Obama accused John McCain of flip-flopping on Cuba policy, of deliberately distorting his own views - and of an "obsession" with Iranian President Mahmoud Ahmadinajad.

“I have never said that I was prepared to immediately normalize relations with Cuba,” Obama told Wolf Blitzer in an interview set to air at 4 p.m. on The Situation Room. “The only person who has flip-flopped on this issue is John McCain, who in 2000 said that he would be prepared to start normalizing relations even if a whole host of steps have not been taken. That is a reversal from the position he is taking now.”

At a Tuesday campaign event in Miami, McCain attacked Obama’s position in favor of a possible relaxation of the Cuban embargo policy and discussions with the leadership of the island nation.

"These steps would send the worst possible signal to Cuba's dictators - there is no need to undertake fundamental reforms, they can simply wait for a unilateral change in US policy. I believe we should give hope to the Cuban people, not to the Castro regime,” said the presumptive Republican nominee, saying the embargo needed to remain in place until the Cuban government democratized.

Watch Obama take aim at McCain today at 4 p.m. and 6 p.m. on The Situation Room.

Obama told CNN Tuesday that his policy, which would loosen restrictions on remittances from Cubans living in the United States to relatives on the island, and on their travel between the United States and Cuba, would be “a show of good faith” that would help move the U.S.-Cuba relationship “in the direction of normalization.”

“And what I have also said is that I will be willing to engage in direct talks with Cuba,” said Obama. “Now, I know that John McCain likes to characterize this as me immediately having Raul Castro over for tea. What I’ve said is that we would set a series of meetings with low level diplomats, set up some preparation but that over time I would be willing to meet and talk very directly about what we expect from the Cuban regime. And so John McCain keeps on making these statements that simply aren’t based on anything I’ve said.”

Obama added that his views on dialogue with Cuba and with Iran followed the same guidelines. “And what I’ve said is I would be willing to meet without preconditions, but with a lot of preparation - and this is the same argument that we’ve been having with respect to Iran,” he said.

“John McCain essentially wants to continue George Bush’s policies of not talking to leaders we don’t like and not talking to countries we don’t like. It has been a failed policy,” said the Illinois senator, adding that Iran had gotten stronger because President Bush “engaged in a war in Iraq that John McCain facilitated that has strengthened Iran.”

McCain suggested at a Chicago campaign event Monday that Obama doesn’t understand the "basic realities of international relations" and that engaging Iranian President Mahmoud Ahmadinejad diplomatically would only embolden him.

"Senator Obama has declared, and repeatedly reaffirmed his intention to meet the President of Iran without any preconditions, likening it to meetings between former American Presidents and the leaders of the Soviet Union," said McCain, who frequently criticizes Ahmedinajad on the campaign trail. "Such a statement betrays the depth of Senator Obama’s inexperience and reckless judgment."

Obama said Tuesday that “this obsession with Ahmadinejad is an example of us losing track of what’s important.

“I would be willing to meet with Iranian leaders if we had done sufficient preparations for that meeting,” but that it was not clear Ahmedinajad might not be as powerful in a year’s time, and “is not the most powerful person in Iran” and might not be able to deliver the actions the United States was looking for.

Obama also said he was “shattered” by the news of Sen. Ted Kennedy’s brain tumor.

“I think you can argue that I would not be sitting here as a presidential candidate had it not been for some of the battles that Ted Kennedy has fought …I stand on his shoulders,” said Obama, adding that Kennedy was “a great model of what a senator can and should be.”