Cafferty:Does Obama have a problem with Jewish voters in Florida?

"The fate of the world for the next four years... it's all going to boil down to a few old Jews in Century Village"… that's the assessment of the 2008 election campaign by Rabbi Ruvi New, according to the New York Times.

While the line is the kind that will get a laugh, the point he's making is very serious: Barack Obama could have a problem with some Jewish voters, especially in Florida.

Obama was in Boca Raton today speaking in a synagogue about foreign policy and his approach to Israel. Florida is critical, and Jews make up almost 4% of voters there. Many of them are elderly, and that's the group that has concerns about Obama.

He has received a lot of support from younger Jews – winning 45% of the Jewish vote in the primaries – if you don't include Florida and Michigan. But the latest Florida poll suggests Obama would lose to John McCain, while Hillary Clinton would win.

Obama didn't campaign in Florida and voters didn't get a chance to know him.

[cnn-photo-caption image= http://i.cdn.turner.com/cnn/2008/images/05/22/art.mccainbill.ap.jpg caption="McCain campaigned in California Thursday as the Senate approved the GI Bill."](CNN) - Two presidential candidates were back on Capitol Hill Thursday, but the third was noticeably absent.

Presumptive Republican presidential candidate John McCain campaigned in California as his Senate colleagues voted to approve a measure that many Republicans and war veterans support – but he opposes.

The legislation, an updated version of the GI Bill, passed the Senate Thursday afternoon by a wide 75-22 vote margin and passed the House earlier this month by a similarly wide margin, proposes to essentially provide a full scholarship to in-state public universities for members of the military who have served for at least three years.

But McCain, as well as President Bush and much of the military brass, oppose the measure because they worry it will deplete retention rates among those currently serving in the military at a time when recruitment efforts are already struggling.

And in what is a sign of just how much of political issue this has become for the Arizona senator, his likely presidential rival Barack Obama took to the Senate floor earlier Thursday to directly chastise him for not supporting the measure.

The bill has already become a political football in the presidential race and poses a major dilemma for McCain: his experience as a post-Vietnam War military officer left him with firsthand experience of the effects of an understaffed military. But his current stand puts him in direct opposition of many veteran organizations whose support will be crucial to his White House hopes.

Democrats, including Obama, see the measure as an opportunity to undermine one of the Arizona senator's greatest strengths - his credibility on military matters and his broad support among military veterans.

END_OF_DOCUMENT_TOKEN_TO_BE_REPLACED

Clinton supporters to swarm DC over Florida and Michigan

[cnn-photo-caption image= http://i.cdn.turner.com/cnn/2008/images/05/22/art.flmiprotest.gi.jpg caption="Protestors picketed the DNC last month to push for full delegate slates for Florida and Michigan."] (CNN) - Supporters of Hillary Clinton are planning to swarm the capital in a little over a week to pressure Democratic Party leaders as they gather to decide the fate of the Florida and Michigan delegations.

The Committee to Count Every Vote – a project of Hillary Responders – said Thursday it was organizing a day-long May 31 rally outside the hotel where members of the Democratic National Committee’s Rules and Bylaws Committee are planning to meet that day.

“It is essential that everyone who can meets in Washington that day to rally for our cherished democratic principles, help enfranchise MI and FL and to show that Hillary has equal numbers of passionate, devoted supporters who believe fervently, notwithstanding any math, that she will the better general election candidate and best president,” they wrote in a message posted on the group’s Web site.

“Our purpose is not to divide the party or attack the DNC or Senator Obama. Michigan and Florida, however, in addition to Hillary's strong support nationwide, cannot and must not be dismissed in DNC efforts to unify the party.”

The group said it was organizing buses to carry protestors to the meeting site, and could offer some overnight housing for those who could not afford to pay for accommodations.

Over the weekend, Clinton told a group of bloggers who support her candidacy that she encouraged efforts to lobby the committee on that day.

“I thank you for zeroing in on the May 31 meeting. There will be a lot of activity around that meeting,” she said on a conference call, adding that it was “important your voices are heard” by DNC members.

(CNN) - Senior Clinton adviser Harold Ickes said again today that his vote last summer to strip Florida and Michigan of their delegates was not at odds with his current push to have full slates from both states seated at the Democratic convention.

On a conference call with reporters Thursday, Ickes said his 2007 vote had been intended to send a message to other states not to follow Florida and Michigan’s lead in scheduling their primaries before February – and by that measure, the decision had been a success.

"We started to invoke a full stripping of the delegates from those two states to send a very strong signal to other states that if they broke the window there would be very severe consequences," said Ickes, who added that both states had already been penalized because neither had benefited from the attention or campaign advertising revenue that would have accompanied a legitimate contested primary.

END_OF_DOCUMENT_TOKEN_TO_BE_REPLACED

Roberts: McCain firing up the grill...and his veep search?

[cnn-photo-caption image= http://i.cdn.turner.com/cnn/2008/images/05/22/art.mccaingrill.ap.jpg caption="McCain is hosting friends and potential VP candidates this weekend."](CNN) - Hidden Valley Ranch. It’s a famous salad dressing, and there’s plenty of talk that John McCain will be looking to dress up the fall ticket at his Sedona, Arizona property that bears the same name. He is assembling three potential running mates at Hidden Valley this weekend. It’s a chance to grill for some good political friends, his campaign insists, but there’s no question that in terms of election year optics, it sure looks like he’s seeing how well they play together in social situations.

McCain certainly loves to grill. Steak, chicken, ribs (though purists will say you smoke ribs). He once even fired up the bar-b-que for the boys and girls on the bus, hosting the traveling press corps one recent weekend. But is this Memorial Day grill-up really just a social event? One man who should know is Minnesota Governor Tim Pawlenty. He attended just such an event on February 29th. This morning Pawlenty told me his weekend was “largely social." I asked him “do you talk a lot of politics? Do you get a sense he’s feeling you out?” “Mostly what you see is John McCain in a relaxed setting," he said. Ha! “Largely” and “mostly”. So he IS kicking the tires on potential running mates!

Every four years we play this parlor game of ‘veepstakes.' But who does have what McCain wants and needs? Pawlenty offered some insight this morning.

“A governor," he said “would bring executive experience, domestic experience, health care reform” “Any decision will be based on geography and politics and credentials."

END_OF_DOCUMENT_TOKEN_TO_BE_REPLACED

In an interview with People Magazine, the former president said he thinks his daughter is a natural campaigner who may one day follow her parents into the family business.

"If you asked me [whether Chelsea would go into politics] before Iowa, I would have said, 'No way. She is too allergic to anything we do.' But she is really good at it," the former president said in the latest edition of the magazine

"It all changed after Iowa," he said. "She realized her mother lost Iowa 100 percent because of younger voters. She was upset, bawled, went to her employer and said, 'Look, you got to let me go or give me an indefinite leave of absence. I'm not letting my mother go down like this.' "

Ellen asks McCain to walk her down the aisle 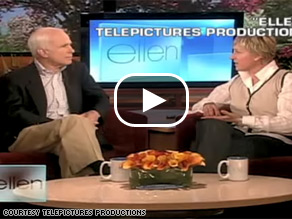 The presumptive Republican nominee said he believes same-sex couples have the right to legal agreements for insurance and other purposes, but opposes gay marriage. “I just believe in the unique status of marriage between man and a woman,” McCain told DeGeneres.

The talk show host pushed further, drawing parallels between the right to gay marriage and the suffrage movements for women and African-Americans.

“We are all the same people,” DeGeneres told McCain. “You’re no different than I am. Our love is the same.”

The Arizona senator said that she had given an “eloquent” defense of her position, but "we just have a disagreement. And I, along with many, many others, wish you every happiness."

Degeneres joked: "So, you'll walk me down the aisle? Is that what you're saying?"

A veteran Democratic activist in Washington confirms to CNN's John King that former Fannie Mae CEO Jim Johnson has accepted Obama's request for him to begin a screening/selection process for the No. 2 spot.

The news was first reported by the Associated Press.

Johnson performed the same role in 2004 and 1984 for then-Democratic presidential nominees John Kerry and Walter Mondale.

The activist, a party operative who has been involved in democratic presidential campaigns and conventions dating back more than 20 years, said it was his information that the process was "at a very early point but that within the campaign itself they have been informally thinking about it for awhile."

NY Times: McCain Set to Release Health Data on Friday
Senator John McCain is set to release 400 pages of medical records, including documents related to his melanoma surgery in August 2000, to a tightly controlled group of reporters on the Friday before Memorial Day weekend.

WSJ: Democrats Set Rules for Meeting About Florida, Michigan Delegates
The Democratic Party released rules for the May 31 meeting that will decide how the Florida and Michigan delegations are seated at this summer's national convention. Like everything else about the dispute, it looks like the meeting will go on and on.

Washington Post: In Wake of Defeats, House GOP Moves to Right the Campaign Ship
Reeling from drubbings in three special elections in the past two months, House Republicans yesterday unveiled a series of tactical and personnel changes at their campaign arm designed to forestall more losses in November. After losing seats in GOP strongholds in Mississippi, Louisiana and Illinois, rank-and-file House members have grown more critical of the leadership of National Republican Congressional Committee Chairman Tom Cole (Okla.) and House Minority Leader John A. Boehner (Ohio), who have repeatedly butted heads themselves.

AP: Mixup negates House override of farm bill veto
The House overwhelmingly rejected President Bush's veto of a $290 billion farm bill Wednesday, but what was to have been a stinging defeat for the president became an embarrassing episode for Democrats.

END_OF_DOCUMENT_TOKEN_TO_BE_REPLACED

* Sen. Hillary Clinton is in DC today and is expected to appear at the Armed Services Committee hearing where Gen. David Petraeus and Lt. Gen Ray Odierno may face a grilling from Senate Democrats about troop levels in Iraq.

* Sen. John McCain speaks at a roundtable, holds a media availability and then heads to an afternoon rally in California.