JEROME, Arizona (CNN) – Many weekends, Sen. John McCain takes advantage of the prolonged battle for the Democratic nomination between Sens. Hillary Clinton and Barack Obama by heading to his home in Arizona to relax and get away from the glare of the media.

But not this weekend. Reporters set up camp outside the presumptive nominee’s Sedona ranch to catch a glimpse of the potential running mates McCain invited over to celebrate the Memorial Day weekend.

Saturday afternoon, McCain and his high profile guests piled into vans and SUVs for a short drive to lunch at the nearby hilltop Jerome Grand Hotel.

Sen. Joe Lieberman is also visiting the ranch but didn’t appear at the lunch. Former Arkansas governor Mike Huckabee and Gov. Tim Pawlenty of Minnesota were invited along for the weekend but had scheduling conflicts.

Dressed in casual weekend gear, the party dined on calamari, steak sandwiches, and burgers at the hotel’s restaurant, The Asylum. The hotel, formerly a hospital, is rumored to be haunted.

Speculation continues to swirl over whether this outing is in fact an audition for potential vice presidential nominees, among them, Romney, Jindal and Crist, who are believed to be on McCain’s shortlist. Both the campaign and the candidate have repeatedly denied it is such gathering, saying it is simply a weekend among friends and a chance for the McCains to thank the guests for their support.

During lunch, the McCains sat with Sen. Brownback and his wife, and Gov. Crist and a companion, while the rest of the guests spread out at three other tables.

McCain picked up the tab for the group and appeared noticeably irritated by the abundance of press when leaving the restaurant. But that didn’t spoil the meal for the Florida governor, who remarked that lunch was “delicious.” 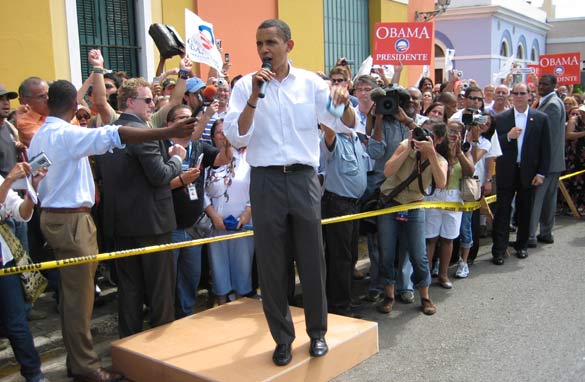 There are 55 Democratic delegates up for grabs, though voters cannot take part in the general election in November.

Obama campaigned early Saturday at the University of Puerto Rico in Bayamon, where he praised the nation's veterans before Memorial Day.

"It's fitting to be here today, not just because Memorial Day is around the corner but because Puerto Ricans are such an important part of the United States military. On this island and in Puerto Rican neighborhoods across America, you can go into almost any home and find a veteran living there or a photograph of a loved one in uniform hanging on the wall," he said.

Obama also took aim at Republican Sen. John McCain over his opposition to an update of the GI Bill. The legislation passed the Senate on Thursday afternoon by a 75-22 vote and passed the House this month by a similar margin. It proposes to essentially provide a full scholarship to in-state public universities for members of the military who have served for at least three years.

"I don't understand why John McCain would side with George Bush and oppose our plan to make college more affordable for our veterans. ... Putting a college degree within reach for our veterans isn't being too generous; it's the least we can do for our heroes," Obama said.

Shortly after Obama's remarks, the McCain campaign hit back.

"Barack Obama talks about helping veterans, but when the choice came between delivering for our military men and women and playing partisan politics, he decided politics was more important," McCain spokesman Brian Rogers said Saturday.

Clinton has done well among Hispanic voters in this year's primaries. She is expected to do well Puerto Rico's primary; Puerto Ricans make up a large swath of her New York constituency.

Read More of the Story

[cnn-photo-caption image= http://i.cdn.turner.com/cnn/2008/images/05/23/art.hrcfrown0523.ap.jpg caption="Sen. Clinton listens during a Senate hearing on Capitol Hill Thursday."]
BRANDON, South Dakota (CNN) - Sen. Hillary Clinton said Friday that she regretted comments that evoked the June 1968 assassination of Robert Kennedy as part of her explanation for why she was staying in the presidential race late into the primary season.

Earlier Friday afternoon, she told the editorial board of the Sioux Falls Argus Leader that "My husband did not wrap up the nomination in 1992 until he won the California primary somewhere in the middle of June, right? We all remember Bobby Kennedy was assassinated in June in California. I don't understand it," she said.

Clinton complained that "people have been trying to push me out of this ever since Iowa" and said that position "historically ... makes no sense."

Later at an event in Brandon, South Dakota, she said, "earlier today, I was discussing the Democratic primary history and in the course of that discussion mentioned the campaigns that both my husband and Sen. Kennedy waged in California in June in 1992 and 1968, and I was referencing those to make the point that we have had nominating primary contests that go into June. That's an historic fact.

Update: During an interview with Radio Isla Puerto Rico on Saturday, Barack Obama reacted to the Clinton RFK comment.

According to a quote released by the campaign, he said, “I have learned that when you are campaigning for as many months as Senator Clinton and I have been campaigning, sometimes you get careless in terms of the statements that you make and I think that is what happened here. Senator Clinton says that she did not intend any offense by it and I will take her at her word on that.”

[cnn-photo-caption image= http://i.cdn.turner.com/cnn/2008/images/05/20/art.bush.ap.jpg caption="President Bush will appear at Sen. McCain's fundraisers."](CNN) - President Bush, who has steered clear of the campaign trail this year, will appear at three fundraisers next week for presumptive Republican nominee John McCain.

The White House hopeful will join its current occupant for at least one of those events, all of which are closed to the press – although White House spokeswoman Dana Perino did say there was a chance that Bush and McCain might make a public appearance together at some point.

"President Bush is fully committed, 100 percent committed, to making sure that John McCain is elected to be the next president of the United States of America," Perino said Friday, adding that he would “do what he can when he can.”

Despite the president’s record high disapproval ratings, Perino said he would be an asset on the trail. "President Bush is a formidable campaign fundraiser, as has been reported over the years, and I expect that he'll continue to be," she said.

Her husband John McCain's presidential campaign said she had received an extension on her 2007 tax returns, and planned to release those as well. Her husband, presumptive Republican nominee John McCain, made his own returns public last month.

Under a prenuptial agreement, the couple keeps their tax returns and assets completely separate. Cindy McCain is heiress to a liquor fortune.

A campaign spokesman said she still had concerns about the privacy of her children - the reason she had given earlier for not releasing the records - she did not want the lingering questions continue to be a distraction from other issues.

The campaign dismissed questions over its decision to release the documents late on the Friday of Memorial Day weekend. "The campaign makes determinations when the make things public," spokesman Tucker Bounds told CNN. "This is something that came together today. We feel very good about that fact that people are able to get the information that they had asked for."

A campaign aide says that Cindy McCain made the decision recently, but this was the first time the campaign had had a chance to release the documents.

He added that the moves will exceed those of Teresa Heinz Kerry, also an heiress, when her husband John Kerry was the Democratic presidential nominee in 2004. Heinz Kerry made one year of returns public, but withheld some portions of the filing, and did not release the information until the final months of the campaign.

[cnn-photo-caption image= http://i.cdn.turner.com/cnn/2008/images/05/23/art.clinton523.ap.jpg caption="Clinton has been citing Karl Rove’s analysis as a basis for her argument."]BRANDON, South Dakota (CNN) - In the face of Barack Obama’s insurmountable lead among pledged delegates, Hillary Clinton on Friday again declared victory in the popular vote and suggested the current nominating process fails to represent the true will of American voters.

“We’re going to have to change the system by which we pick the nominees, I believe, and we are with the system we have now,” Clinton said, responding to a supporter here who lamented the role of superdelegates in selecting the party’s nominee. “And I’m a big believer in one person one vote, and I believe in as much democracy as possible.”

Clinton told the supporter that “superdelegates will play a big role” in choosing the nominee, but said she would prefer a primary-only system in which nominating contests would be bundled together.

“I think that’s an issue for debate in the future because I believe we should have primaries everywhere, and everybody, as many people as possible should be encouraged to vote,” she said. “We ought to group them so that nobody is at the tail end, so everybody has a chance to participate. But that’s all for the future.”

Despite her apparent dig against superdelegates, Clinton and her campaign have routinely argued that those party elites should be able to exercise their independent judgment in choosing a nominee, regardless of vote totals or pledged delegate counts.