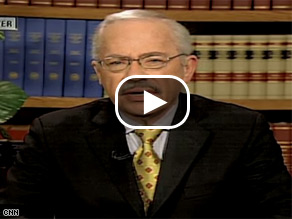 "There are two folks that are out to spoil the race here - it's Senator Obama and Senator McCain. They're setting out, I think, to spoil our chances," he told CNN's "American Morning."

He added, "There are millions of voters out there that are not going to vote for Senator McCain, and we aim to reach those voters with the message of smaller government and more individual liberty."

For years, Barr was a prominent Georgia Republican in the House. He played a leading role in the impeachment of former President Bill Clinton.

His positions on some issues have left some Libertarians unsure about his candidacy. He opposed legalizing marijuana for medical purposes, supported the Patriot Act, and co-sponsored the Defense of Marriage Act.

While the Defense of Marriage Act was backed by opponents of gay marriage, and allowed states not to recognize same-sex marriages performed in other states, Barr told CNN Monday that it was a "very sound individualistic and states' rights policy."

Barr, 59, left the Republican Party in 2006, and announced in April that he would form a presidential exploratory committee. He was elected to the House of Representatives in 1994 and represented a conservative district in the Atlanta suburbs for four terms.

He worked as an occasional contributor and analyst for CNN after leaving office.

The last two Libertarian presidential candidates, Michael Badnarik in 2004 and Harry Browne in 2000, drew fewer than 400,000 votes each. But Barr is a more prominent political figure, and his selection Sunday at the Libertarian National Convention in Denver is drawing more attention to the party.

He told CNN Monday he hopes to have his name on the ballot in all 50 states, and vowed, "We are going to launch a very vigorous campaign all across America."