Cafferty: What should Dems do about Michigan & Florida? 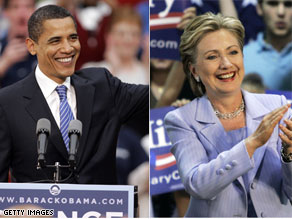 The Democratic Party is going to try to sort out the headache created by Michigan and Florida.

The rules committee meets this weekend to decide what to do with the delegates from those states. Michigan and Florida broke party rules by moving up their primaries and as punishment were stripped of all their delegates. It was made clear to them before they changed the primary dates that is what would happen.

Party lawyers say the DNC has the authority to seat some of these delegates, but not all. They say seating half of the delegates is quote “as far as the committee can legally go.” And, once the committee decides how many of the delegates to seat then they need to figure out how to divide them between Clinton and Obama. Could be a long weekend.

It becomes pretty tricky when you consider that in Michigan, Barack Obama’s name wasn’t even on the ballot. It’s also important to note that both candidates signed a pledge not to campaign in either state and agreed the primaries should be invalid if the states changed the dates.