Bill Clinton: This could be the 'last day' 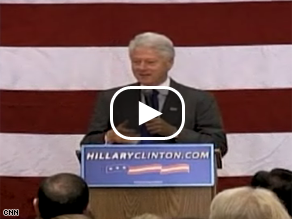 (CNN) - Could this be Bill Clinton's last day on the stump this campaign season? The former president seemed to signal that his time on the trail was drawing to a close at a campaign event in South Dakota Monday.

"This may be the last day I'm ever involved in a campaign of this kind," he said.

The comment comes one day before South Dakota and Montana hold the primary season's final two contests. Barack Obama is expected to hold the advantage over Hillary Clinton in both states.

"I thought I was out of politics, until Hillary decided to run. But it has been one of the greatest honors of my life to go around and campaign for her for president," Clinton also said.

The comments seem to suggest the former president believes his wife's campaign is coming to a close, though she has given no signs she is ready to end her run.

Earlier Monday, a Clinton spokesman denied reports the campaign is cutting members of it's advance team. And on Sunday, Clinton launched an new ad stressing she is the winner of the popular vote. She also argued to reporters that the party's superdelegates have the right to change their mind until the party's convention in late August.