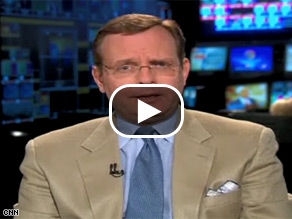 (CNN) - The Vanity Fair journalist who infuriated the Clinton campaign over the weekend with an explosive article that questions former President Bill Clinton's business dealings and behavior since leaving the White House strongly defended his reporting Monday in an interview with CNN.

Todd Purdum, the national editor of Vanity Fair, stood by his article's most controversial assertions in an interview with Wolf Blitzer, including charges that aides to the former president believe his 2004 heart surgery fundamentally altered the 61 year-old's state of mind.

Purdum, a former White House reporter for the New York Times and the husband of former White House Press Secretary Dee Dee Meyers, also defending his claim that some aides grew concerned with rumors Bill Clinton had been "seeing a lot of women on the road."

The lengthy article hits newsstands later this week, though Vanity Fair has posted a copy on its Web site. That prompted a blistering response from Clinton campaign spokesman Jay Carson Sunday night, who called the piece "journalism of personal destruction at its worst."

"A tawdry, anonymous quote-filled attack piece, published in this month’s Vanity Fair magazine regarding former President Bill Clinton repeats many past attacks on him, ignores much prior positive coverage, includes numerous errors, and ultimately breaks no new ground," he added.