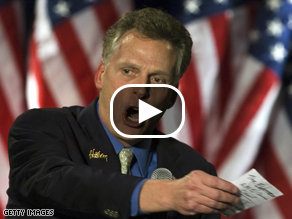 WASHINGTON (CNN) - Hillary Clinton is "absolutely" not prepared to admit Barack Obama has beaten her in the race for the Democratic nomination for president, Clinton campaign chairman Terry McAuliffe told CNN Tuesday.

The comments came minutes after the Associated Press reported Clinton is preparing to concede the delegate race Tuesday night as the five-month Democratic primary process comes to a close.

Obama "doesn't have the numbers today, and until someone has the numbers the race goes on," he also told CNN.

As of Monday night, Obama led Clinton among the delegates who formally nominate the party's candidate, with 2,076 to 1,917. A candidate needs 2,118 delegates to clinch the nomination. There are 31 delegates at stake in Montana and South Dakota, plus nearly 200 superdelegates who have yet to declare who they support.

Clinton is scheduled to speak on her home turf of New York tonight as polls close in the last two states of the Democratic nominating process.

"The AP story is incorrect. Senator Clinton will not concede the nomination this evening."