Obama: I will be the Democratic nominee 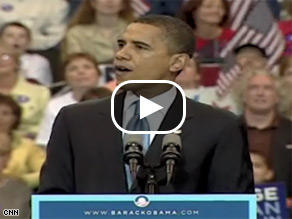 WASHINGTON (CNN) - In what he called a "defining moment for our nation," Sen. Barack Obama on Tuesday became the first African-American to head the ticket of a major political party.

Obama's steady stream of superdelegate endorsements, combined with the delegates he received from Tuesday's primaries, put him past the 2,118 threshold, CNN projects.

"Tonight we mark the end of one historic journey with the beginning of another - a journey that will bring a new and better day to America," he said.

"Tonight, I can stand before you and say that I will be the Democratic nominee for president of the United States."

Obama's rally was at the Xcel Energy Center in St. Paul, Minnesota - the same arena which will house the 2008 Republican National Convention in September.

Speaking in New York, Sen. Hillary Clinton, congratulated Obama for his campaign, but she did not concede the race nor discuss the possibility of running as vice president.