(CNN)– In the latest installment of CNN=Politics Daily, CNN’s Joe Johns reports on Sen. John McCain’s efforts to counter Barack Obama’s charge that his administration would represent a continuation of President Bush’s policies.

Obama reached the magic delegate number of 2,118 Tuesday night, but Sen. Hillary Clinton has yet to concede the nomination. Senior Political Correspondent Candy Crowley explains what the New York senator’s next move could be.

Both parties’ presumptive nominees are eyeing Clinton’s strong group of female supporters. CNN’s Carol Costello has the latest details on McCain and Obama’s effort to woo her core constituency, while Internet reporter Abbi Tatton takes you online where Clinton asks her supporters for some help.

Sources: Clinton will officially suspend on her run on Saturday

[cnn-photo-caption image= http://i2.cdn.turner.com/cnn/2008/POLITICS/06/04/democrats.wednesday/art.clinton.gesture.gi.jpg caption="Sources tell CNN Clinton is bowing out on Saturday."] WASHINGTON (CNN) - Sen. Hillary Clinton will officially end her campaign for the presidency by the end of the week, multiple sources told CNN.

Sen. Hillary Clinton said Tuesday that she will let her supporters and party leaders decide her course.

The campaign said late Friday that Clinton would be hosting an event in Washington Saturday to "thank her supporters and express her support for Senator Obama and party unity."

Obama and Clinton were in Washington on Wednesday to each address the influential American Israel Public Affairs Committee. The candidates ran into each other at the AIPAC conference and had a brief chat, Obama spokeswoman Linda Douglass said.

"She's an extraordinary leader of the Democratic Party and has made history alongside me over the last 16 months. I'm very proud to have competed against her," Obama told the Israel lobbying group.

Obama became his party's presumptive nominee Tuesday and will be looking to unite Democrats divided by the long and contentious primary season.

"I am very confident how unified the Democratic Party is going to be to win in November," he said in a Senate hallway Wednesday.

UPDATE: The Clinton campaign has announced it is holding an event Saturday to "to thank her supporters and express her support for Senator Obama and party unity."

Warner and Kaine to campaign with Obama in Virginia

[cnn-photo-caption image= http://i.cdn.turner.com/cnn/2008/images/06/04/art.va.gi.jpg caption="Warner and Kaine are set to campaign with Obama Thursday."]
WASHINGTON (CNN) - Presumptive Democratic nominee Barack Obama will kick off his general election campaign in the purple state of Virginia on Thursday – and two of the state’s most prominent Democrats, Mark Warner and Tim Kaine, will be along for the ride.

Another high-profile Virginia Democrat, Sen. Jim Webb, is remaining mum on whether he will appear with Obama tomorrow, even though the newly minted nominee has scheduled an event in rural southwest Virginia, his home turf. Webb has yet to endorse a candidate.

Warner, the popular former governor who is now the frontrunner for the Senate seat left vacant by retiring Sen. John Warner, will campaign with Obama tomorrow in the city of Bristol, just over the Tennessee border. Warner was elected governor of Virginia in 2001 partly because he worked to win over rural voters in the southwestern part of the state, the very place Obama will campaign tomorrow.

Obama won the state’s primary handily on February 12, but he lost overwhelmingly to Hillary Clinton in the state’s rural Ninth Congressional District by 33 points, the first hints of a pattern of vulnerability among white, working-class voters that continued to nag him throughout later primary states like Ohio, Pennsylvania and West Virginia.

Gov. Kaine will appear briefly with Obama tomorrow evening at a rally in Manassas. The event will take place at Nissan Pavilion, a 25,000-seat concert venue in Manassas that in recent weeks has hosted acts like Radiohead and Kanye West.

Kaine has been one of Obama’s most ardent backers, and was one of the first prominent Democratic leaders to endorse the Illinois senator’s presidential bid in 2007.

WASHINGTON (CNN) - Less than a day after Barack Obama effectively clinched the Democratic presidential nomination, CNN has confirmed that some of the staffers at Hillary Clinton’s campaign headquarters have been told that Friday is their last day of work.

The New York senator - who visited them at her Arlington, Virginia headquarters late Wednesday afternoon after learning of the news - invited them to gather at her home Friday, according to several of those present.

The meeting was described as emotional for some. "We are talking to people who have been at this 24-7,” one staffer told CNN. “We are not surprised - and we are stunned. What can I tell you?” The staffer said Clinton herself was "gracious," but offered no further description of her demeanor.

ABC, which first reported the development, also said those on staff have been informed they will continue to receive paychecks through June 15.

“There’s no bargaining. You don't bargain with the presidential nominee,” Rendell told NY1. “Even if you're Hillary Clinton and you have 18 million votes, you don't bargain.”

Rendell – the governor of a major November battleground state who has often been mentioned as a possible vice presidential pick – said Obama would need to be an “enormously big person” to invite Clinton to join him on the ticket.

But in a reversal from earlier statements – and remarks at odds with recent comments from many major Clinton supporters – Rendell seemed to signal that a joint ticket featuring the party’s two candidates was not ideal.

He said that if Clinton were Obama’s running mate, her husband - former President Bill Clinton - could be a wild card during the general election.
END_OF_DOCUMENT_TOKEN_TO_BE_REPLACED

Rangel, the senior member of the New York congressional delegation and an early supporter of Clinton’s presidential campaign, said in an interview Wednesday Clinton should have been more clear about what her future plans are.

"I would agree that after the math was in before her speech, that she could have been far more generous in terms of being more specific and saying that she wants a Democratic victory," Rangel said in an interview on MSNBC.

"I don't see what they're talking about in prolonging this," Rangel added. "There's nothing to prolong if you're not going to take the fight to the convention floor…I don't know why she could not have been more open in terms of doing up front what she intends to do later."

Rangel also said the entire New York congressional delegation is awaiting guidance from Clinton on what to do, and could be put "on the spot" if the New York senator does not explain herself soon. 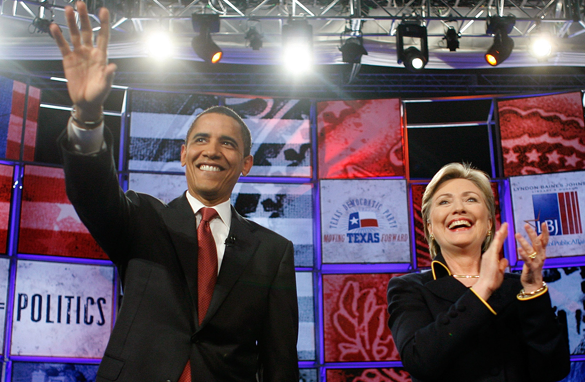 END_OF_DOCUMENT_TOKEN_TO_BE_REPLACED

The game is on. And voters have two very different candidates to choose from to be our next president. John McCain and Barack Obama presumably won because they were the strongest candidates of their respective parties, but both men have issues they’ll have to overcome if they want to win.

Exit polls from the primary season show that both candidates’ problems start with the economy – the number one issue for voters this election. McCain and Obama failed to get even half the votes from people worried most about the economy.

Blitzer: As the race comes into focus, the gloves come off

[cnn-photo-caption image= http://i.cdn.turner.com/cnn/2008/images/03/13/art.blitzer.jpg caption="CNN Anchor Wolf Blitzer"]
NEW YORK (CNN) - One of the most memorable lines of Barack Obama’s speech Tuesday night in St. Paul involved his opponent in the general election: John McCain, a man “who has served this country heroically.” Obama then pointedly added: “I honor that service, and I respect his many accomplishments, even if he chooses to deny mine.”

It was consistent with Obama’s oft-stated praise of McCain’s military service, who was a POW during the Vietnam War. But it also included a polite dig.

McCain, for his part, pointedly noted that “the American people didn’t get to know me yesterday, as they are just getting to know Senator Obama.” It was his way of suggesting that the presumptive Democratic nominee is still a blank slate for a lot of Americans.

Just watching and listening to their respective speeches highlights their many differences including their backgrounds and age. Obama is 46 and McCain is 71.

END_OF_DOCUMENT_TOKEN_TO_BE_REPLACED

"I have never had a president who inspired me the way people tell me that my father inspired them," Kennedy wrote then. "But for the first time, I believe I have found the man who could be that president - not just for me, but for a new generation of Americans."