[cnn-photo-caption image= http://i.cdn.turner.com/cnn/2008/images/06/04/art.obamaaipac.ap.jpg caption="Obama delivered a speech at AIPAC Wednesday."]WASHINGTON (CNN) - Sen. Barack Obama directly addressed accusations that have been circulating by e-mail when he addressed a pro-Israel conference Wednesday.

"I want to say that I know some provocative e-mails have been circulating throughout Jewish communities across the country," the presumptive Democratic presidential nominee said at AIPAC's annual conference.

"They're filled with tall tales and dire warnings about a certain candidate for president. And all I want to say is - let me know if you see this guy named Barack Obama, because he sounds pretty scary."

Rumors have been circulating at least since last year that Obama is a Muslim and does not support the Jewish state. He is a Christian and said at the conference he is a "true friend of Israel," earning applause.

END_OF_DOCUMENT_TOKEN_TO_BE_REPLACED

[cnn-photo-caption image= http://i.cdn.turner.com/cnn/2008/images/06/04/art.obamacap.ap.jpg caption="Obama is back on Capitol Hill Wednesday."] WASHINGTON (CNN) - Barack Obama's run for the White House bodes well for the future, the presumptive Democratic nominee told CNN Wednesday, a day after he clinched the nomination.

"There is a matter-of-factness to it that i think bodes well for the future."

The Illinois senator said it was "an enormous honor" and "very humbling" to be the first African-American to lead a major party ticket for president.

END_OF_DOCUMENT_TOKEN_TO_BE_REPLACED

Pelosi: Obama is the nominee

[cnn-photo-caption image= http://i.cdn.turner.com/cnn/2008/images/06/04/art.pelosi.ap.jpg caption="Pelosi said the race is over."]WASHINGTON (CNN) - House Speaker Nancy Pelosi said Wednesday that the Democratic presidential race is over, and it's time to rally around the party's nominee.

"Running for President is not for the faint of heart. This is very difficult, and people have to unwind from it in their own time, but I think the message was clear last night. The people have spoken, the elections are over for the nomination. Barack Obama is the nominee of the Democratic party," Pelosi said.

The California congresswoman, who remained neutral throughout the primary season, said Senator Hillary Clinton should be able to take some time before formally conceding - but stressed the party's need to shift its focus to the general election.

Asked about a Friday deadline she and other party leaders set for uncommitted superdelegates, Pelosi said it's time for those undeclared party officials to get behind Obama: "Now it's time to rally around that person and attribute to him all that goes with being - carrying the banner of the Democratic party and all the dignities that go with it."

Pelosi praised Senator Clinton as a female trailblazer. "The campaign of Senator Clinton is one that will down in the history books as a great one for our country, breaking what I call the marble ceiling, what they call the glass ceiling. Glass is easy compared to the ceiling that she broke, couldn't be prouder of her."

END_OF_DOCUMENT_TOKEN_TO_BE_REPLACED

"Senator Obama argued today that American foreign policy in recent years has essentially sort of strengthened Iran," said Lieberman on a conference call for reporters hosted by John McCain's campaign Wednesday. "..If Israel is in danger today, it's not because of American foreign policy, which has been strongly supportive of Israel in every way. It's not because of what we’ve done in Iraq, it’s because Iran is a fanatical terrorist expansionist state."

On the same call, Republican Rep. Eric Cantor of Ohio said Obama's speech did nothing to dispel doubts about his commitment to Israel.

END_OF_DOCUMENT_TOKEN_TO_BE_REPLACED

[cnn-photo-caption image= http://i.cdn.turner.com/cnn/2008/images/06/04/art.mccaindeb.ap.jpg caption="McCain has raised the prospect of town halls with Obama before."] BATON ROUGE, Louisiana (CNN) - John McCain on Wednesday challenged Barack Obama to join him for a series of town-hall debates.

Calling for "no process questions from reporters" and "no spin rooms," the presumptive Republican presidential nominee proposed one debate a week from now until the Democratic party convention in August.

McCain cited a 1963 agreement between John F. Kennedy and Barry Goldwater to hold such debates as part of the 1964 election campaign. Kennedy was assassinated before the campaign began.

"What a welcome change it would be were presidential candidates in our time to treat each other and the people they seek to lead with respect and courtesy as they discussed the great issues of the day, without the empty sound bites and media-filtered exchanges that dominate our elections," McCain said in a letter to Obama released by McCain's campaign.

McCain suggested he and his rival travel together to the first one as a symbolic gesture.

He joked that his campaign would appreciate the budget savings. Obama has raised tens of millions of dollars more than McCain for his White House run.

The Obama campaign has not yet issued a response to McCain's proposal, though when McCain raised the prospect last month, the Illinois senator called it a "great idea."

The longtime and often fierce loyalist of the New York senator launched a petition Wednesday night in hopes of landing Clinton on Barack Obama's presidential ticket. The petition, located at womenforfairpolitics.com, directly tells Obama that "Your selection of a vice presidential candidate may make the difference between victory and defeat."

"We write to urge you to select Sen. Hillary Rodham Clinton to be your choice for vice president because we believe that she would be, by far, the most qualified and strongest candidate to be your running mate.

Davis, who has known the Clintons since their law school days at Yale, says he is not acting on the campaign's behalf in launching the petition drive.

"Both you and Sen. Clinton during this campaign have demonstrated strengths in different segments of the electorate and in different parts of the country. Together, you stand the best chance of making U.S. history not once but twice - the first African American president and the first female vice president since the founding of our great nation," the petition also said.

Often appearing on CNN, Davis has been a tenacious advocate for Clinton during the course of the primary season. Following Obama's speech on his relationship with the Rev. Jeremiah Wright in March, Davis expressed concern on the Huffingtonpost.com that Obama still had not answered several questions about the controversial pastor. In a Wall Street Journal Op-Ed a month later, Davis again pressed the Illinois senator to address "unanswered questions" about his former pastor more fully. He also wrote an article on the Huffingtonpost.com in April titled "The Top Ten List of Undisputed Facts Showing Barack Obama's Weaknesses in the General Election Against John McCain."

END_OF_DOCUMENT_TOKEN_TO_BE_REPLACED

According to congressional sources and Obama's campaign, Emanuel was at hand for Obama's speech before AIPAC earlier Wednesday. He will release a formal statement on the endorsement later in the day.

Clinton: Obama will be 'good friend to Israel'

Though Clinton has yet to concede the Democratic race and spoke Wednesday of what she would do as president, she told the America-Israel Public Affairs Committee that Obama "understands what is at stake here."

"It has been an honor to contest these primaries with him. It is an honor to call him my friend. And let me be very clear: I know that Senator Obama will be a good friend to Israel," the New York senator and former first lady said.

"I know that Senator Obama shares my view that the next president must be ready to say to the world: America's position is unchanging, our resolve unyielding, our stance nonnegotiable. The United States stands with Israel, now and forever," she said.

END_OF_DOCUMENT_TOKEN_TO_BE_REPLACED

In the latest episode of CNN=Politics Daily, Senior Political Analyst Bill Schneider digs into exit polling data and takes a closer look at some of the challenges Obama may face in the general election.

Sen. Hillary Clinton also led a historic, groundbreaking presidential campaign. Carol Costello reports on what may be next for Clinton.

Finally, White House Correspondent Suzanne Malveaux, who first reported on Clinton's interest in the No. 2 spot on the Democratic ticket, has some reaction from inside the Obama camp to the increasingly clear and aggressive efforts by the Clinton campaign to position the New York senator for the vice presidential spot. 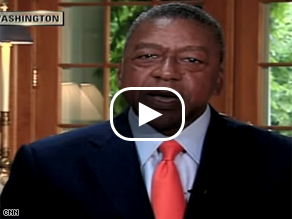