Obama: 'Everybody needs to settle down' about VP choice 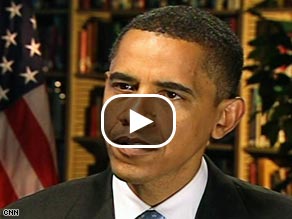 (CNN) — Barack Obama said Thursday he's in no rush to pick a vice presidential candidate, telling CNN “everybody needs to settle down" and let the vetting process run its course.

Speaking with CNN's Candy Crowley Thursday, the presumptive Democratic presidential nominee said it's not in his best interest — or in the interest of his former rival Hillary Clinton — to make a hasty decision about who will serve as his running mate.

"Everybody needs to settle down, we just completed this arduous process," Obama told CNN's Candy Crowley. "It's only been two days, and I think its not just in my interest and Senator Clinton's interest, but in the Democratic Party's interest and the country's interest, to make sure I make this decision well."

Calling his choice of running mate “the most important decision that I will make before I am president,” the senator from Illinois said he would “be deliberate and systematic about it because this will be my final counselor when I am making decisions in the White House, and I want to make sure I get it right."

Many of Clinton’s supporters have publicly called on Obama to put Clinton on the ticket to help unify the party since he captured the nomination Tuesday night, but Obama said he would not respond to pressure from others on who he should choose.

"We have a committee that's made up of wonderful people. They are going to go through the procedure, and vet, and get recommendations. I will meet with a range of a people, and I will ultimately make a decision.

“I am a big believer in making decision well, not making them fast and not responding to pressure," he also said.